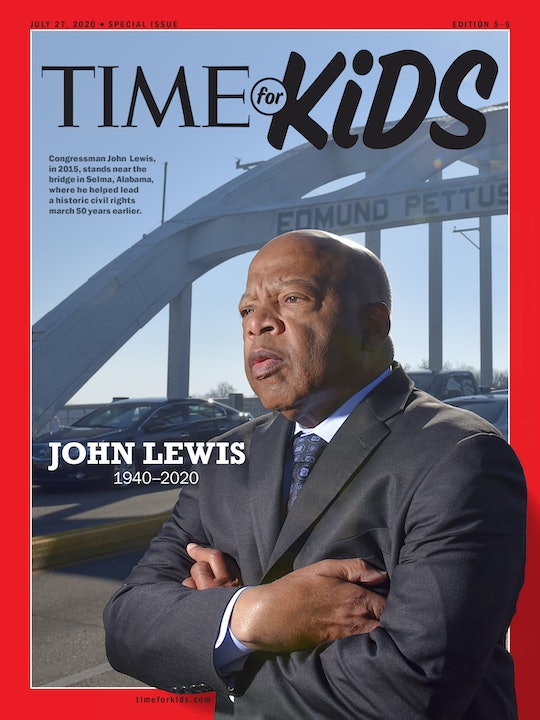 "We must do the work that justice and equality calls us to do." The words of John Lewis are undoubtedly ringing in so many of our minds and hearts right now, and it's hard to conceive of a world without him. The new Time for Kids honoring Congressman John Lewis helps us explain to our children who he was, what he wanted, and how we may continue his legacy.

This special issue is free and available online right now. It opens with the article "Honoring A Hero," which chronicles his life as a brave activist and Civil Rights leader who worked alongside Martin Luther King Jr., and a brief bit about the march in Selma, Alabama. The biography then remarks upon his long and storied congressional career as the Congressman for Georgia's Fifth Congressional District. The magazine goes on to discuss his radical and award-winning young adult graphic novel trilogy, March, with co-author Andrew Aydin. It then goes on to eulogize Mr. Lewis, with quotes from Congresswoman Alexandria Ocasio-Cortez, and Atlanta mayor Keisha Lance-Bottoms among others.

One of the 13 original Freedom Riders, Mr. Lewis never let fear outweigh the courage of his conviction. Beaten nearly to death on the Edmund Pettus Bridge, John Lewis would return to that same place for many years so that those in power, and those with privilege, never forgot the indignity and horror that befell him. Our children need to know that he fought for all of them when he marched. He fought for the hope and future of Black and Brown and Indigenous children, and he fought so that the stain of racism and hate might not grow in the hearts of White children.

When Mr. Lewis became a Congressman, he toiled every day, striking out against legislation that would keep power in the hands of the undeserving. He fought for gay rights, for healthcare, for voting rights, and livable wages that could support a family. He spoke loudly and animatedly at the 2012 Democratic National Convention in Atlanta, Georgia, urging Americans to work toward forgiveness, but not forgetting the progress that has been made. He told the audience, "Your vote is precious, almost sacred; it is the most powerful nonviolent tool we have to create a more perfect union." These children of ours, reading this magazine, taking in the snippets of a life so rich and so important, will be the continuation of his deepest hope for this country. We need to hold them close and teach them well, just as he did for us.

Basically, this is all the summer reading your kids need.