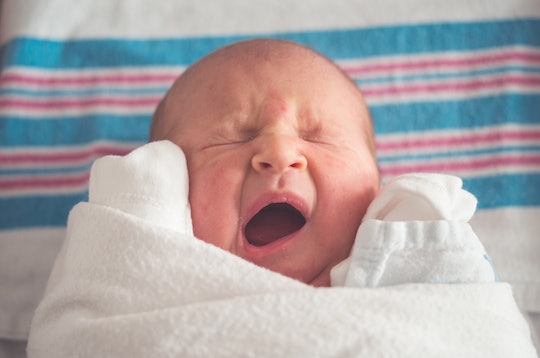 If you've ever dealt with a colicky baby, you know exactly how painful it can be for both the baby and the parents who are desperately trying to figure out how to comfort them. These seemingly endless bouts of crying become even more difficult to deal with when you can't put your finger on the root cause. If you are trying to find a way to help your colicky baby find some relief, you should know the tiny thing exacerbating your kid's colic.

As What to Expect explained, colic is a term used to describe extreme bouts of crying in otherwise healthy babies. Bouts of colic usually last longer than three hours a day, for more than three days per week, for longer than three weeks, according to WebMD. And while colic affects one in five babies, no one can really put their finger on the reason why it happens.

Colicky behavior was once thought to be triggered by painful gas in a baby's intestines due to food passing too quickly through the gastrointestinal system. However, as Parents mentioned, it is now believed that the gas is actually a result of baby swallowing air while crying.

As Baby Center pointed out, colic isn't specific to firstborns, formula-fed babies, or either sex, which can make it difficult to attribute the behavior to any one particular cause. But one possible theory is that baby's cries are brought on as a result of overstimulation. According to What to Expect, at the end of the first month, babies lose the ability to eat and sleep without being distracted by their environment. All of a sudden they become aware of the sights and sounds around them. The influx of all of these new sensations causes some babies to become overwhelmed and cry during the evening hours.

According to the American Pregnancy Association, holing your colicky baby is one of the most effective ways to help relieve their symptoms. Parents also suggested white noise, low light, and soft singing to comfort your baby. If you find that none of your soothing techniques help, and the crying becomes too much to handle, leave your baby in a safe place while you have a chance to collect yourself. As the American Pregnancy Association mentioned, 90 percent of colic cases end by nine months. So hang in there, this too shall pass.