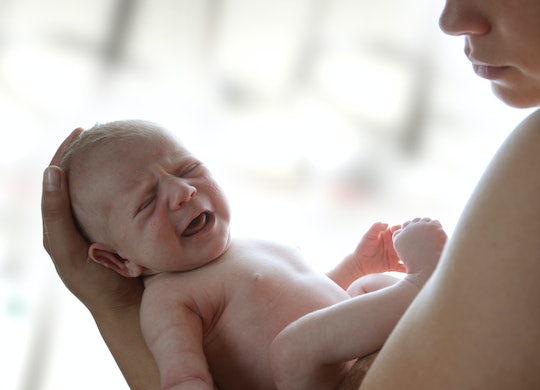 The Tiny Thing Keeping Your Baby From Latching

Whether you've been breastfeeding for several months or just a few weeks, you may encounter a poor breastfeeding latch with your baby. It's generally not something to be alarmed about, but it can be quite frustrating. Assuming your baby doesn't have a medical condition that is preventing them from breastfeeding properly you should be able to correct it easily. Because the tiny thing keeping your baby from latching is most likely the position in which the baby is feeding.

The first thing to do is inspect and observe your baby's latch in your current position. According to the Dr. Sears website, your baby's lips should be facing outward, not inward while nursing. The same website also explained that your baby's mouth should be covering most of your areola, your baby's tongue should be between their lower gum and the breast, and the baby's ears should be wiggling a bit. If these things are not happening, you most likely have a poor latch. The biggest indicator of a bad latch is pain. According to What To Expect a poor breastfeeding latch often causes the baby to nibble on the end of the nipple, which causes cracked nipples and a whole lot of soreness.

Once you've determined that your baby is indeed not latching well, you can start to adjust your position or your baby's position (or both) when breastfeeding. According to Today's Parent, you should position your baby tummy to tummy at all times no matter which position you ultimately choose. The American Pregnancy Association explained that there are three main breastfeeding positions to try with your baby, one of which is called the cross cradle. It's done by using the arm on the opposite side you're feeding with to hold your baby, while using the hand on the side you're feeding from to support your breast. The other is the cradle hold in which the baby rests in the crook of your elbow of the same side you're feeding on. You can use your opposite hand to help hold the breast if needed. The last one the website lists is the side lying position and it's done by laying your baby on its side and placing a pillow or something for support behind them, while the mom is also laying on her side towards the baby. Playing around with different positions and making tiny adjustments will ultimately (and hopefully) help you find a position that is most comfortable for you and your baby.

A poor latch is sometimes an indication of an underlying issue so it's best to seek the advice of a lactation consultant if adjusting positions doesn't help. There will probably be times during breastfeeding when it will be more difficult than usual for a plethora of natural and normal reasons. Securing a good latch from the get go will ensure that you and your baby bounce back from these breastfeeding challenges faster and easier.