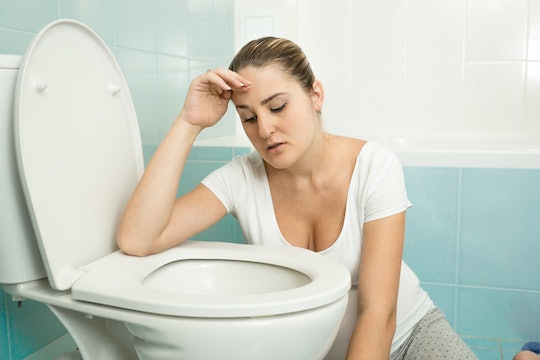 The Tiny Thing That Could Help With Morning Sickness

Anyone that's suffered from morning sickness knows how wretched it can be. Sometimes you're so sick you can't do your daily activities and routines. It can be so bad that it really gives you a sour taste — rather sour stomach — for pregnancy itself. Thankfully, the tiny thing that could help with morning sickness could help you cope with this in a big way.

Morning sickness, or as it's medically called, nausea gravidarum, is a condition that plagues approximately 75 to 80 percent of pregnant women, according to Baby Center. Additionally, the name "morning sickness" isn't totally accurate, because you can get sick all day long. I was unlucky enough to have it with both of my pregnancies and it was absolute hell. I couldn't eat a single thing without feeling incredibly nauseous after. If I waited too long to eat, I'd get sick. If I ate too much, I'd get sick.

But I didn't even have the worst of it. Some women get something much more severe. Morning sickness' more severe sister, hyperemesis gravidarum, is characterized by non-stop nausea, vomiting, weight loss, and dehydration, according to Medical News Today. Both conditions typically shows up around the fourth and sixth week of pregnancy and stop after week 12. Although, they both can last for longer. Duchess Kate Middleton was hospitalized for hyperemesis gravidarum during her first pregnancy, according to ABC News, which forced to announce her pregnancy early

There isn't really anything you can do to stop morning sickness from happening, but there are things you can do to help lessen or alleviate the symptoms. One tiny thing you could try is eating something sour to help with morning sickness, according to Parents. It sounds completely counter intuitive, but pregnant woman and medical professionals swear it can help.

Cara Itule is a psychotherapist in Los Angeles who works with pregnant women and has suffered from severe morning sickness herself, she says sour is the only thing out of all of the tips and recommendations that actually works. "I get that this is an odd oxymoron approach to nausea, but it works! It really helps," Itule told Romper. "Sour candies, sweet and sour citrus fruits like mandarin oranges and Meyer lemons, or lebneh, which is lebanese cream cheese." The same Parents article above noted that even if you carry something sour around with you like a lemon and scratch and sniff it throughout the day it could help with queasiness.

Most women suffering from morning sickness can be rest assured that it will go away after the first trimester. Eating something sour might seem like the last thing you want to do with an upset stomach, but giving it a try could be the key to less queasy days ahead.