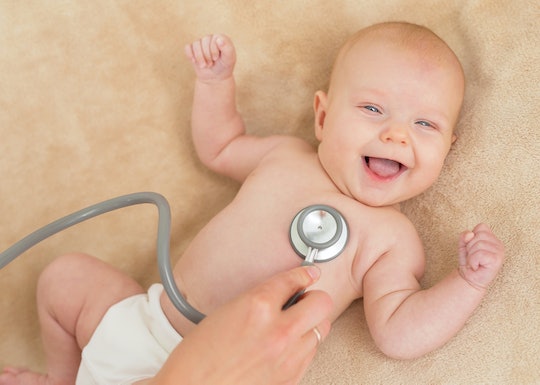 These Are The Top 4 States For Children's Health

It goes without saying that health care is a top priority for parents and that many families across the United States are worried about America's fragile health care system. Although some states are thriving hubs for children's health, a lot of states are struggling to keep its kids healthy. If you're a parent or will be on in the near future, it's important to be aware of which states are the best for children's health. Even if your state didn't make the top four listed below, it's still crucial to know why these states topped the rankings. Knowledge is power, and you could potentially use this information to call for necessary changes in your home state.

According to "WalletHub's 2017’s Best & Worst States for Children’s Health Care" list, Vermont, Iowa, Connecticut, and Massachusetts are the top four states for children's health. WalletHub made its determinations by analyzing "50 states and the District of Columbia across three key dimensions: 1) Kids’ Health & Access to Health Care, 2) Kids’ Nutrition, Physical Activity & Obesity and 3) Kids’ Oral Health," according to WalletHub. The three categories were then evaluated using 28 applicable metrics, and each metric was graded on a 100-point scale, with 100 being the best grade possible. Finally, overall scores were calculated on its "weighted average across all metrics."

Now that you know how the findings were determined, here are the top four states for children's health.

Coming in at number four, Iowa received a score of 61.71. Using a scale of 1 out of 51, with one being the best score possible, Connecticut received a 5 in the category of Kids’ Health & Access to Health Care, a 20 for Kids’ Nutrition, Physical Activity & Obesity, and a 1 in Kids’ Oral Health.

Although it's not exactly clear why Iowa scored so high in Kids' Oral Health, it could be because of the state's "hawk-i" initiative, a program that provides qualifying low-income kids with free "cleanings and check-ups, fluoride treatments, sealants, fillings, crowns, and medically necessary orthodontia," according to hawk-i.

Connecticut's success is probably linked to the Children’s Fund of Connecticut, a public foundation "dedicated to ensuring that children in Connecticut have a strong start in life with ongoing supports to promote their optimal health and well-being," according to the fund. Since 1997, the foundation has been making improvements in children's health and mental health with the help of grants.

As for why the state received such high rankings, it probably has to due with the high amount of prestigious children's hospitals in the area. According to a 2017 ranking from U.S. News & World Report, Boston Children's Hospital ranked in the top three for every category analyzed, including neonatology, pediatric cancer, pediatric cardiology & heart surgery, pediatric diabetes and endocrinology, pediatric gastroenterology and GI Surgery, and pediatric neurology & neurosurgery, to name a few.

Coming in at number one, Vermont received an overall score of 72.15. Using a scale of 1 out of 51, Vermont received a 1 in the category of Kids’ Health & Access to Health Care, a 1 for Kids’ Nutrition, Physical Activity & Obesity, and a 5 in Kids’ Oral Health.

If you are from Vermont or know a lot about the state, it shouldn't come as a surprise that it came out on top. In 1989, the state launched "Dr. Dynasaur," a progressive health care initiative offering "low-cost or free health coverage for children, teenagers under age 19, and pregnant women," according to Green Mountain Care. In addition to "Dr. Dynasaur," the state also created numerous programs to improve the health of its kids, including the Vermont Child Health Improvement Program, Blue Print for Health, and Children's Integrated Services, to name a few.

They’re [Vermont] focusing on the child and the family, and not so much trying to fit the child in different bureaucratic holes.

In a perfect world, parents everywhere would be able to give their kids the best health care possible. Although it's helpful to know what states are the best for children's health, WalletHub's "2017’s Best & Worst States for Children’s Health Care" list is mostly a reminder that parents have to speak up and advocate for their children if they want their state to improve its policies.