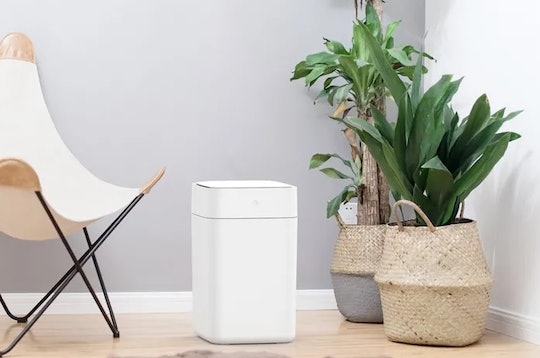 OMG, This Trash Can Seals Itself & *Replaces The Bag* When You Take It Out

Well, we are officially living in Back to the Future times. It's not the self-driving car or Hoverboards that caused this realization (you'll never catch me near either of those). No, it's a product that I could actually see using in my home on a daily basis that has me looking for Michael J. Fox around every corner. Mamas, the world's first ever trash can, Townew, to self-seal and change itself is upon us, and I am 100 percent here for it. No more mess. No more nasty smells as you hurriedly tie the bag, then spend the next three minutes struggling to get it out of the can only to discover it's caught on who knows what. Excuse me while I restrain myself from adding all the exclamation points. I've reached the point in my life where an innovative and high tech trash can excite me to no end.

Knectek Labs in Canada is responsible for this amazing new invention, the Townew, thanks to a highly successful IndieGoGo campaign. Using the motto "simple tech for the modern home," they have created a product I think families are going to love. So, let's talk specifics. When you approach the Townew with a piece of trash, its sensor technology will detect your movement and pop the lid up automatically. Um, way cool. Then, after throwing in your trash, the lid closes itself. When the bag has filled to the top, you touch a button on the outside of the Townew and using thermoplastic technology, it seals itself. BUT WAIT, THAT'S NOT ALL. When you take the sealed bag out (ugh, I guess there's one thing us humans still have to do ourselves), the Townew changes the bag so a fresh one is ready to go. No leaks, no stink, no mess. Can I just snap my fingers and have one of these in my kitchen now, please?

Happily, there is even more to love about the Townew. Because Knectek Labs cares about being a sustainable company, the Townew uses durable trash bags made with PE Material, which is better for the environment. The refill ring, which contains up to 25 trash bags and is 100 percent recyclable, should be replaced approximately once a month. Powered by a 2000 mAh battery, it gives a long lasting battery life with a full charge that will last for a month. The Townew's minimalist style was created to fit any home's design, and I love that they've given a teal color option in addition to white. I can see this being great for a baby's room (hello, smelly diapers) in addition to the kitchen.

One last messy trash can item to mention, if you're like me and avoid dealing with the trash for as long as you can. Yes, for those of us who are trash can procrastinators, the Townew also addresses overloading. The Townew will detect when the trash can has become too full, lifting the whole top compartment part of the trash can so it can seal the bag, guaranteeing you no spillage. I mean, now you're just showing off, Townew.

I suggest watching the video to see the Townew in action. Modern technology really does have its perks, right? If you're interested in purchasing a Townew at a reduced price, there are actually nine days left on Knectek Labs' IndieGoGo campaign. For $70 you can purchase a trashcan for 52 percent off that will be shipped out to donors this fall. Otherwise, the Townew will be nearly $150 when it hits stores. So, what kind of household technological advancement do you think we'll see next?