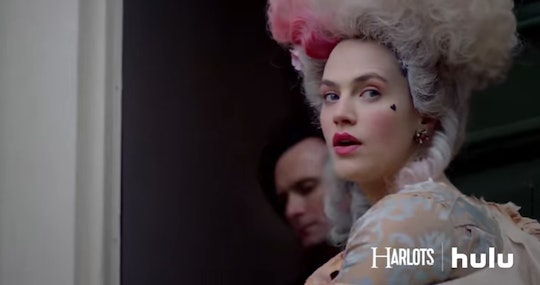 With every year that passes, it seems like streaming services are expanding their original programming more and more. Hulu may not have gotten the earliest start in the game, but many of their original shows offer interesting new perspectives and the service is beginning to build real buzz with its upcoming projects. Their newest show Harlots has an interesting premise: it tells the story of sex workers in 18th century London strictly from the point of view of the women central to the story. Now the trailer for Hulu's Harlots is here and it makes it clear that it's all about the women.

Harlots stars Samantha Morton and Leslie Manville as rival brothel owners and madams, with Jessica Brown Findlay playing Morton's oldest daughter, who also happens to be a courtesan herself. The show takes inspiration from an 18th century sex worker directory called Harris's List of Covent Garden Ladies, which was essentially a guide to the working women of the time in London. But while the directory was written by male "patrons and pimps," the show is dedicated to telling the stories of its female characters from their perspective. And to do that effectively, the show also has a behind the scenes team made up entirely of women, from the directors to the writing staff to the producers.

"We really set out to get all female directors. We got the best of the best in the U.K., and it has influenced the show exactly the way we wanted it to," executive producer Debra Hayward said during the Television Critics Association's Winter press tour. Directors for the show include Coky Giedroyc, who previously worked on Penny Dreadful, and China Moo-Young, who has experience with the show's themes from her days working on Secret Diary of a Call Girl.

Viewers can expect to see every facet of the characters' lives: the financial aspects of sex work, the work itself, and also how the women balance their position in society with their personal lives. "It's a show about economics as much as it is a show about sex work," said actress Leslie Manville. "What the show does really well is show prostitution from every social angle."

"It was very important to us from the beginning to make it about the female gaze," said Alison Owen, another of the show's executive producers. "We were determined to make something different. Our hope from the beginning was, 'Everything from the whore's eye view.'" It bodes well that a show so dedicated to expressing women's stories also has women behind the scenes telling those stories.

The show premieres on Hulu on March 29 of this year.