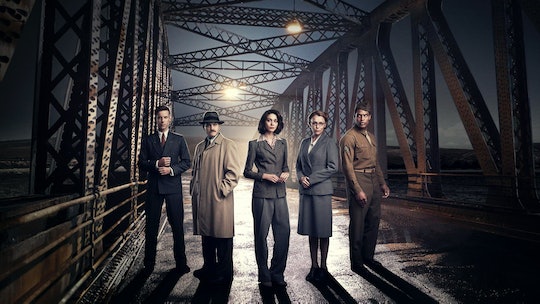 Traitors, the post-WWII spy drama set in 1945 now streaming on Netflix comes from the mind of Bathsheba "Bash" Doran, who has writing credits on other period dramas like Boardwalk Empire and Masters Of Sex. Her show's female protagonists have a strength that gives some people Killing Eve vibes. Its tone has been described as "unusual and unapologetically contemporary" by The Guardian critic Rebecca Nicholson. Sounds exciting, right? You're going to want to know them — so let me tell you what I know about the Traitors cast, because some of it may surprise you.

Emma Appleton, who plays Feef Symonds — the main protagonist in Traitors who is recruited by an American agent to uncover Russian infiltration into the British government — is a relative newcomer in the industry. She starred as Fay Brookstone in Season 1 of the BBC drama Clique in 2017. Before playing Feef, Fay was Appleton's most significant role. So when Traitors hits Netflix she'll get her first real taste of international exposure.

One of Appleton's castmates is no stranger to acclaim of the Oscars variety. You may have seen Michael Stuhlbarg in one of three Academy-award nominated films in 2017. Stuhlbarg played Mr. Perlman in Call Me By Your Name, Soviet spy Dr. Robert Hoffstetler in The Shape Of Water, and New York Times editor Abe Rosenthal in The Post. These are quite impressive roles and Stuhlbarg knows a year like that is rare in Hollywood. He told GQ in 2017, "It's been a good year. I feel really really lucky to have been a part of all the things that seems to have sought me out. So I'm grateful."

Rowe — Stuhlbarg's character in Traitors — is anti-Soviet, and his role in The Shape Of Water prepared him to play both sides. In 2017 he told GQ that Dr. Hoffstetler "...needs to sort of present himself in one way for the Americans, and he's a completely different way with the Russian side of the story." Sounds like he was beyond prepared to play Rowe. He might also be a favorite of Doran, as he's had significant roles in two other series she's written for: Boardwalk Empire and The Looming Tower.

But a link with the Academy Awards isn't the only impressive connection this cast can boast of. Like most people, I am immediately starstruck by anyone who knows a member of the Spice Girls. Traitors' other female lead, Keeley Hawes, starred in BBC One's Bodyguard and was Emma Bunton's (aka Baby Spice) bestie.

“I did spend a lot of time at your house," Express reported Bunton saying to Hawes on BBC's The One Show in February, where Hawes and Appleton were promoting Traitors and Bunton was hyping the Spice Girls' reunion. “Yeah, we were besties and we spent a lot of time together and it felt like she lived there,” Bunton continued to hosts Matt Baker and Alex Jones.

“I don’t like the way you just said that,” Hawes reportedly joked. Unfortunately, Baby Spice doesn't make a cameo in the show, but I still can't wait to watch all of Traitors.