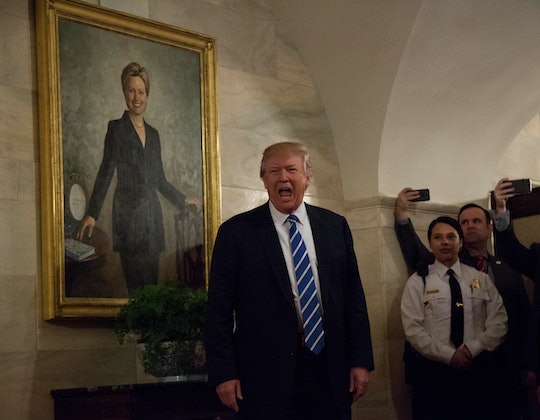 So you didn't want former Secretary of State Hillary Clinton for president. You didn't want Trump, either, but you have too much dignity to vote for the lesser of two evils. So you stayed home, or maybe you wrote in Bernie's name, just to stick it to the man. Do you regret that decision now? Because your president's new trans ban proves Trump and Hillary weren't "the same." Not on any conceivable level.

We get it, Bernie Bros and Stein... heads? Clinton is a "Washington insider." She's not folksy enough. She refuses to bake cookies. All high crimes, to be sure. But one thing's for sure: had Clinton won in November, I can guarantee she wouldn't have attempted to enact a policy discriminating against members of the armed forces based on their gender identity, and she sure as hell wouldn't have claimed that the motive for such a policy was "tremendous medical costs and disruption." Despite all his blustering about how much he loves and supports the troops, Trump's despicable tweets on Wednesday morning insulted thousands of them who have served their country with courage and honor, and his excuses would be laughable if they weren't such a clear attempt to enact a hateful agenda.

First, let's examine these "tremendous medical costs." A RAND study commissioned by the Department of Defense in 2016 found that providing medical care for transgender personnel would increase health care expenditures by $2.4 million to $8.4 million per year, which accounts for somewhere between 0.005 and 0.017 percent of the total budget. Covering this care wasn't an issue, apparently, even for the 24 House Republicans who very recently voted against an amendment that would have barred paying for such services. Incidentally, $2.4 million is only one-tenth of the amount that it cost to protect Trump Tower from Election Day to Inauguration Day, according to Fortune. If Trump wants to save money, there are plenty of other ways to cut corners.

Far more insulting is the idea that the U.S. military would be "burdened" by the "disruption" of having a transgender person simply existing. Right now, thousands of deployed troops are waiting to hear if they should hand in their guns and go home based on a series of unhinged tweets by the leader of the country they're sworn to protect. Does that not qualify as a disruption?

It's easy to speak in hypotheticals, though. How can I possibly know that Clinton wouldn't have enacted the same policy, since she's not president? Well, unfortunately, that's true, but we do know that in 2010, when she was Secretary of State, she implemented a policy allowing transgender Americans to obtain a passport that reflects their correct gender identity, regardless of whether they'd had confirmation surgery. In 2015, she cheered on the TSA for dropping an outdated and offensive term for transgender passengers. And although Trump has always flip-flopped on transgender bathroom rights, Clinton has always been on the right side of the issue.

Clinton has consistently shown, through public statements and actual policy, that she supports and respects all Americans, regardless of orientation, gender identity, or religion. Six months into his presidency, Trump has attempted to enact his third ban on a segment of the population that he refuses to see as equal. Clinton was never the lesser of two evils, and it's time to admit that.