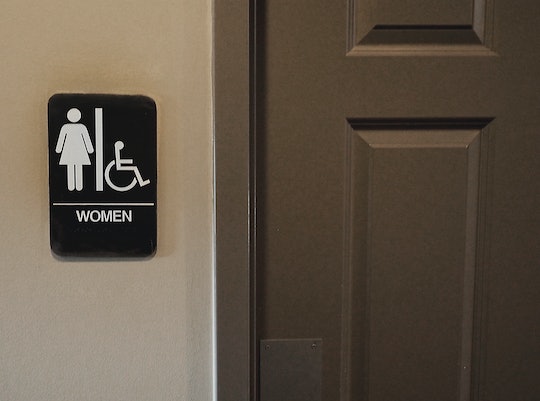 Transgender rights are currently under fire. Recent actions made by the Trump administration rolled back the Obama-era provisions which had worked to allow students the ability use the bathroom that corresponded to their respective gender identities. This wasn't the first blockade of this nature, though; There was already a transgender bathroom court ruling that stopped Obama's mandate in its tracks in 2016. Though President Barack Obama was actively fighting for transgender rights in schools — a legacy he was known and lauded for — his measures were never actually able to take full effect.

Initially, Obama spread the mandate nationwide, insisting that already-existent nondiscrimination laws must be applied to transgender rights as well, and saying that 1972's Title IX ruling, which "prohibits discrimination on the basis of sex in any federally funded education program or activity," must therefore also protect transgender students from discrimination, as far as bathrooms and locker rooms are concerned. Obama threatened that a failure to provide these rights to students would result in decreased federal funding for schools.

But these efforts were soon thwarted by a federal judge in Texas; Judge Reed O'Connor claimed that Obama's decision was not in compliance with the law. O'Connor turned the issue away from the protection of transgender students an into an argument about states' rights instead. In his eyes, this measure put states in an uncomfortable spot, requiring them "to comply with the guidelines and cede their authority over this issue" or else disobey the federal government completely. Thus, Obama's guidelines were put on hold.

After Trump's recent rescinding occurred, a letter was sent by both the Justice and Education departments, notifying schools that Obama's expectations had been lifted for the time being "in order to further and more completely consider the legal issues involved," CBS News reported. Still, the final decision in this heated debate may boil down to how Title IX is interpreted in the end. A member of Trump's team, Attorney General Jeff Sessions, argued that there was a lack of "sufficient legal analysis or explain how the interpretation was consistent with the language of Title IX" in Obama's initial argument.

Now, with President Donald Trump in office, increasing protections for transgender students goes doesn't appear to be a priority, with the federal government shirking that responsibility and allowing it be dealt with on a state by state basis instead. This is by no means the end of this issue, however, as transgender student Gavin Grimm's Supreme Court case will begin March 28th.

Certainly, transgender students and their families will keep fighting for their protections, regardless of how various levels of courts interpret a decades-old law.