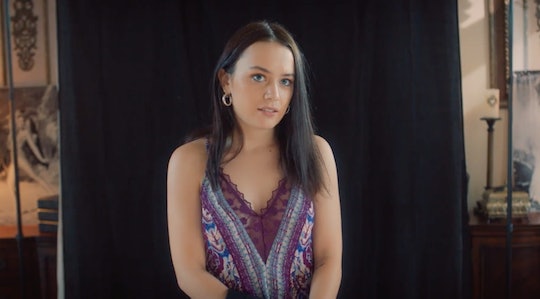 Lifetime Sure Knows How To Make A "True Crime" Fan Happy

Part of Lifetime's MO is creating and airing movies inspired by true events. I'm into it, especially when it's as captivating as a major headline I'm already familiar with. I have no shame admitting I'm drawn to those types of movies and I'm not alone. The network's latest "ripped from the headlines" feature-length drama is calledTrapped Model. And the Trapped Model true story is the stuff nightmares are made of.

Based on a deep dive investigation on which headline Trapped Model is about, my guess is that it's based on the chilling story of Chloe Ayling. This is an educated guess, because Lifetime's website doesn't spell out much in the way of exact information, but I'm 99.9 percent sure Ayling's case is the subject, if only in theory. If you aren't familiar, The Guardian sums it all up with the tagline, "British glamor model was kidnapped in Milan and held for six days in a remote farmhouse." That sounds eerily similar to Lifetime's movie description of Trapped Model: "Grace, an aspiring model, is thrilled to have fashion photographer Hunter Kelly help launch her career. But when the photo shoot becomes a kidnapping showing Hunter’s true intentions to use Grace as his next “star” on a sexy website, Grace must find a way to escape before she becomes Hunter’s next model murder victim."

While the descriptions aren't exactly the same, there's enough similarities to tie the two together. In the same Guardian piece, it's explained that Ayling went to the British consulate and explained her captors released her after six days. Apparently, when she arrived at her modeling shoot in Milan, the kidnappers drugged her with a tranquilizer, put her in a bag, and drove 120 miles away to a remote farmhouse. They gagged her, and while she was mostly unconscious throughout the six days, she confirmed they'd planned to auction her off on the dark web to be a sex slave. It definitely sounds like the definition of an "inspired by true events" Lifetime movie.

Fox News said Ayling had a plan to "make the kidnappers fall in love with her" to survive and escape. She'd noticed how infatuated they'd become with her and decided to act on it. Smart, but also risky. "The more we started talking, the more the bond was kind of forming and once I realized he was starting to like me, I knew I had to use that to my advantage," the model told BBC. Coincidently, authorities weren't sure Ayling's story was completely true. Convicted kidnapper, Lukasz Herba, set up the photoshoot after "falling in love with her," before they ever met. He said the kidnapping was meant to boost her modeling career.

And so, Ayling did what anyone might do: she allegedly pretended to fall in love with her abductor, happily planning a future with him to encourage him to put his guard down. "I thought this is my chance to get out," Ayling said in the same BBC interview. "Once I saw his reaction to what I was saying, that things could happen in the future — he was acting excited and really looking forward to it and always talking about it — it was that response that made me realize I needed to keep doing that."

As you can see, the true story is just as fascinating as the fictional flick — if the two are based on the same circumstances. Then again, I could have the whole thing backwards. In the preview, the model is seen fighting back against her captor, not pretending to fall in love. But who knows? Regardless, Lifetime knows how to reel viewers in like no one else.