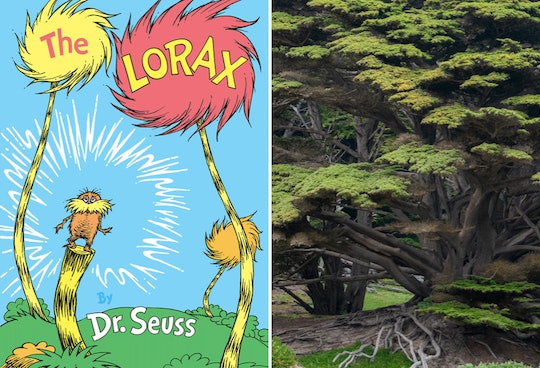 The Tree That Inspired Dr. Seuss' Beloved Children's Book 'The Lorax' Has Fallen

The great thing about stories is that they live forever, even when the thing that inspired them is long gone. That’s the thing to keep in mind today as the sad news that the tree that inspired Dr. Seuss’ The Lorax has fallen down circulates. The Monterey Cypress tree had a great, long physical life and will now live on in memory and imagination for all time.

Unlike the plot of the book it's said to have inspired, the tree was not knocked down by industry but most likely just by time. It was thought to be between 80 and 100 years old and stood in Ellen Browning Scripps Park in La Jolla, Calif, according to CNN. Dr. Seuss lived with his wife in the city from 1948 until his death in 1991, according to the San Diego Tourism Authority, and the couple owned an observation tower from which it is thought he could see the tree.

The story of The Lorax is about a small community devoid of trees and wildlife. Only a mysterious resident called the Once-ler knows how things came to be. A small boy is able to learn the story, which is a tale of the Once-ler’s greed that polluted and ruined the area. The titular Lorax is a being who speaks for the trees and animals.

The website for the city of San Diego notes that Dr. Seuss — whose real name was Theodor Geisel — was “notoriously upset about the billboards and construction that threatened his tranquil community of La Jolla. He was incredibly environmentally conscious and concerned about the Earth as a whole; this was evident in his multiple political cartoons and subtle messages within his literature. The Lorax, a Dr Seuss book published in 1971, weaves a familiar tale of just that: "a good thing gone wrong."

The Lorax was made first animated into a children’s special for CBS in 1972. And in 2012 it was made into a feature-length animated movie starring Zac Efron and Taylor Swift. That iteration expanded on the tale by including a love story in which Ted wants to win the hand of his crush, Audrey. Sweetly enough, those were the real first names of Dr. Seuss and his wife.

The tree in Ellen Browning Park was notable for its top-heavy look, mirrored in the book by the Truffula trees’ colorful fronds. Newsweek reported that a spokesman for the city’s Parks and Recreation department said there is no “definitive cause” for why the tree fell, but he said the city is planning to save the large trunk with the plan to repurpose it. Monterey Cypress are only found on the Pacific coast and are rare, according to CNN.

On the website for Dr. Seuss’ work, Seussville.com, parents and kids can search by character to find the Lorax and pull up activities related to the story. There is blank form to write a letter to Mother Earth, a counting game, and a maze. There are also educator resources for Earth Day planning that can help students think about the environment and the physical world.

The tree may be gone, but thanks to Dr. Seuss it’s already been given immortality. May it keep inspiring children for generations to come.