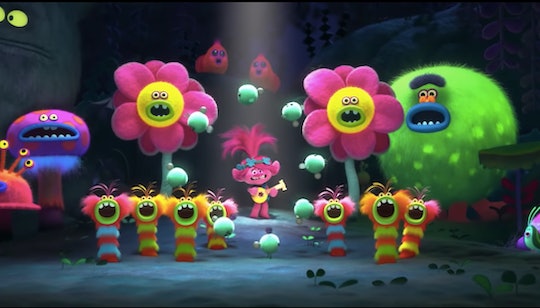 Your favorite animated gang is back, and this time, it's for a fight to save all of music-kind. Maybe you're a Trolls fan. Maybe you had troll dolls when you were a kid, or have been subject to hours of the first movie on repeat because your own child cannot seem to get enough of it. Well, great news, because the tune is about to change. The Trolls World Tour trailer is here, and from the looks of it, this movie is going to rock even harder than the first one.

For a debriefer: In the first Trolls flick, your favorite famous people — including Anna Kendrick, Justin Timberlake, Christopher Mintz-Plasse, Zooey Deschanel and Russell Brand — teamed up to play a cast of trolls haunted by the presence of the Bergens, the antagonists who liked to eat their species and threaten their happy-go-lucky way of life.

Now, the trolls themselves are back, and Kendrick and Timberlake are both headlining as the lead characters, who have to team up to face yet another major threat. This time around, it's all about the music. In fact, music is such a huge part of the trolls' lives, this movie goes a little bit deeper into their history and origins with it.

In the trailer, we see that the trolls are broken up into 6 categories, each that lives in their own land and has mastered and devoted their lives to a different type of music: Funk, Country, Techno, Classical, Pop and Rock.

However, trouble brews when the leader of the rock land decides that he wants to eliminate all other types of music and to just have Rock be the only music of the trolls. In their attempt to become the authoritarian, fascist leaders of the troll civilization, they recognize that they need to get 6 "cords," each belonging to one of the groups. When put together, it would allow its owner to gain power over all other music types. (If you're thinking it sounds a lot like the Infinity Stones, that's because it does.)

Though the journey they take to maintain their autonomy and keep the beautiful harmony of different music types alive is certainly exciting enough, there's an added bonus for the grownups: it features a star-studded cast with some of your favorite musicians of all time.

According to the film's official description beneath the first trailer on YouTube, Mary J. Blige, George Clinton, Anderson .Paak., Kelly Clarkson, Sam Rockwell, J Balvin, Ester Dean and Jamie Dornan are just some of the big names involved in the movie.

Though no behind-the-scenes footage of the cast has been released yet, there's plenty from the first film featuring Kendrick and Timberlake to keep us excited until then.

"It’s been so much fun to work with her," Timberlake told Collider of Kendrick in 2016, prior to the first film's release. "All the work that we actually did together was just me sitting at the board, and us talking about her singing and her vocal performance. 'Get Back Up Again' is her singing, but she’s also acting. There’s a lot that goes into that."

Kendrick echoed the sentiment: "As someone who’s a singer, he gives such specific notes that are so helpful that it just tightened it so much, and I feel like we got so much more heart and mischief and sass from [my character]."

It seems that these two have fantastic chemistry, and we're excited to see them and a whole new crew of stars back on screens next year.

Trolls World Tour is set to hit theaters next April.