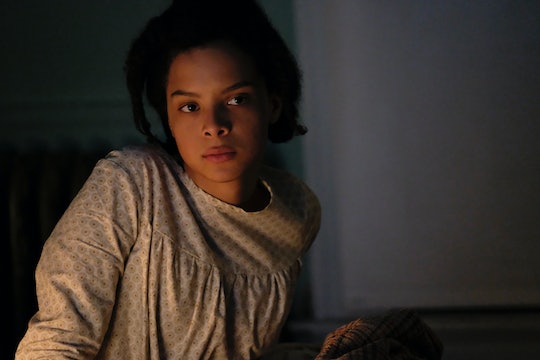 If You Need A Dose Of Inspiration, Check Out Regina Louise's Story ASAP

Lifetime knows how to get you in the feels with their deeply personal original movies. Their latest, I Am Somebody's Child, is no exception. Actually, it may be one of the most emotionally wrought films the network has aired for a few reasons. The true story of I Am Somebody's Child explores one woman's journey through the foster care system and how, despite good intentions from a woman wanting to adopt, it didn't have the outcome you'd expect. Sometimes — as this film shows — the system fails. I Am Somebody's Child proves good things may come — just not when you hope they will.

The real life inspiration for the movie, Regina Louise, is now the author of Somebody's Someone, and Someone has Led this Child to Believe a motivational speaker and a foster care abolitionist who speaks on how she navigated the foster care system to find an adoptive mom, decades later. Yep — decades. In Louise's first book, Somebody's Someone, she told her story as, as Chronicles of Social Change put it, "a poor, abused and neglected African-American girl whose only wish was to find love and belonging." This is a story which resonates with many other foster children.

Her story officially began as a toddler when her biological mother left her in Austin, Texas, "in the care of a woman who took in kids," The Los Angeles Times said. "Her father only vaguely knew she existed." Unfortunately, her singer/songwriter father, the late Tom Brock, abandoned her to pursue his music career. Just after she turned 13, she became a child of the state. That's where her story took a devastating turn. From 13 until she aged-out of the foster care system at 18, Louise was in more than 30 different foster homes and psychiatric facilities. As Louise said in an interview with Agate Publishing, foster care is, "A business with the intention of parenting children from the outside in." She explained further saying, "Organizations have budgets, and it can become problematic if and when a child’s healing trajectory is directly affected by that budget."

There was one woman, Jeanne Kerr, who petitioned to adopt Louise. You'd think that's where Louise found her happy ending, but the courts denied the adoption — because Kerr is white, and Louise is black. It didn't matter the two shared a connection because back then, race relations and segregation were inexplicably unjust.

Kerr eventually married, had a child of her own, and moved south, while Louise returned to school on scholarships. Though having no home or family to return to during breaks proved difficult. She attended San Francisco State where she'd eventually garnered bachelor’s and master’s degrees to make up for all the time lost through those foster care years. Then, at age 40 and with a 17-year-old son of her own, Kerr was finally able to adopt Louise in a beautiful twist of fate. "You need somebody to show up for you," Louise told the San Francisco Gate.

Mardi Louisell, a consultant for California Permanency for Youth Project, explained why the foster care system is failing so many children in similar situations saying, "Older kids haven't been looked at as a group that needs a home. The system is set up to consider kids over 11 not adoptable, so social workers often don't go about finding an extended family that will be there for them beyond the age of 18."

In Lifetime's adapted version of this story, Louise also confessed the surreal nature of seeing her life play out in front of her. One scene in particular showed Kerr (Ginnifer Goodwin) teaching Regina (Angela Fairley, who is a foster child in real life) to swim for the first time. Louise explained the visceral tone from tensions of the times in that same interview. She said it was hard to watch due to the, "Racism, discrimination, and disdain for these two human beings moving forward with love."

The true story of I Am Somebody's Child may not resemble circumstances of your own, but there's one universal truth embedded in Louise's life on and off screen: we all deserve to be loved and accepted.