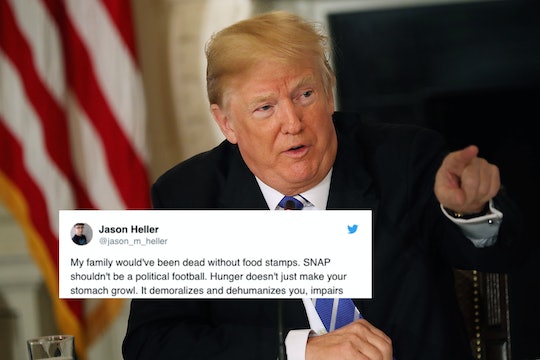 On Monday, the Trump administration included a proposal in its budget request for fiscal year 2019 that is definitely drawing some attention. The administration wants to replace part of SNAP with food boxes, and it's hugely problematic. The proposal suggests replacing a portion of the current federal food stamp program with literal boxes of food delivered to the front doors of recipients, taking away at least part of their ability to choose their own food while participating in the program.

SNAP is the Supplemental Nutrition Assistance Program, and it "offers nutrition assistance to millions of eligible, low-income individuals and families and provides economic benefits to communities," according to a page about the program provided by the United States Department of Agriculture's website. And even if you don't know much about it because you've never been in a position to qualify for SNAP, you likely know someone who has. As of January 2016, 45.4 million people were participating in SNAP, according to Snap To Health, an informational website about the program and nutrition in the United States.

The proposed change would affect millions of Americans, and experts say, at the very least, it "removes choice" from those who benefit from the program. Of those millions, 76 percent of SNAP benefits go towards households with children. 39.8 percent of SNAP participants are white, while 25.5 percent are African-American, 10.9 percent are Hispanic, 2.4 percent are Asian, and 1 percent are Native American, Snap to Health reported. Essentially, every major population and a lot of families are impacted by this proposal.

Under the proposal, instead of getting money loaded onto an EBT card to buy food that falls under certain guidelines, low-income Americans who receive at least $90 a month — which is just over 80 percent of all SNAP recipients — would get around half of their benefits in the form of a "USDA Foods package" instead, according to NPR. The proposal stated that the package would consist of "shelf-stable milk, ready to eat cereals, pasta, peanut butter, beans and canned fruit and vegetables," that outlet reported. Notably, the boxes would not include fresh fruits or vegetables.

The proposal is buried in the White House’s fiscal 2019 budget, and according to the plan, the food in the packages would have to be deemed "nutritious" by the government and be 100 percent grown and produced in the U.S., according to CNN Money. So anyone who's not a fan of more "big government" control would likely not be in favor of such a proposal, since it takes a huge degree of choice away from the consumer and gives it to those in charge of the program.

Director of the Office of Management and Budget Mick Mulvaney likened the part of food stamp recipients’ benefits coming in a food box to meal delivery services, and stated the portion would “come in… a Blue Apron-type program where you actually receive the food instead of receive the cash," according to Fortune. But experts are not so keen on the idea, no matter how the White House may try to spin the proposal as being relatable to popular meal delivery services or as a better option for recipients.

Douglas Greenaway, the president of the National WIC Association, said of the proposal, according to NPR:

Removing choice from SNAP flies in the face of encouraging personal responsibility...the budget seems to assume that participating in SNAP is a character flaw.

And Stacy Dean, the vice president for food assistance policy at the Center for Budget and Policy Priorities, said the notion that the government could save on costs by distributing food itself is "ill-informed at best."

Indeed, the USDA estimated it would save $129 billion over a decade under the new program, driven partly by the government's "unique purchasing power," CNBC noted. But some experts feel that costs could actually increase in other areas.

But aside from the money saved or possible rising costs in other areas, aside from where this food would come from, and aside from why the administration might want to so radically change a program where 44 percent of all of its participants are children, the proposal is super problematic in the sense that it removes agency from anyone participating in it.

It feels uncomfortably like the proposal is suggesting that the government knows better than participants do about what they should be eating or feeding their families. That's especially troubling, since, as stated above, SNAP helps people of all races and backgrounds, and almost two-thirds of children who get SNAP live in single-parent households, Snap to Health reported, where parents already face scrutiny for their parenting choices and the decisions they make for their families. SNAP benefits also go towards people with all kinds of religious and cultural leanings that might not be considered or respected in a one-size-fits-all food delivery strategy.

There's already a stigma against getting food assistance in the U.S. — now imagine if you needed the assistance, but had no say in the sort of nutrition you receive. Some experts believe the delivery of these food packages would be a "logistical nightmare," as NPR put it, and recipients would instead have to go to specific locations to pick them up, again reinforcing the stigma.

Plus, as some people pointed out on Twitter, the new proposal could create all sorts of dangerous problems for those participating. If, for example, a family didn't receive their box one month — what if they had no room in the budget to replace those goods, and the kids in that family suddenly had no food? Or, consider the homeless. Where would their food be delivered, if the proposal truly does turn into a government-to-front-door sort of situation? EBT cards helped to eliminate some of those concerns or possibilities.

SNAP benefits go to people of all different backgrounds and in all sorts of situations. As Miguelina Diaz with the organization Hunger Free America noted to NPR, the items included in the boxes "could be something that [SNAP recipients] don't even know how to make," and having a set box of goods come to someone's house as decided by the government could "limit the choices of food they can prepare for their families."

Critical food assistance shouldn't be merely a numbers game. It shouldn't be about restricting the agency of participants who are just looking for a leg up with their food budget when they're struggling. People and families from low-income households should, at the very least, have some control over the food they eat, and it's incredibly problematic to take even that little bit of choice away from them.