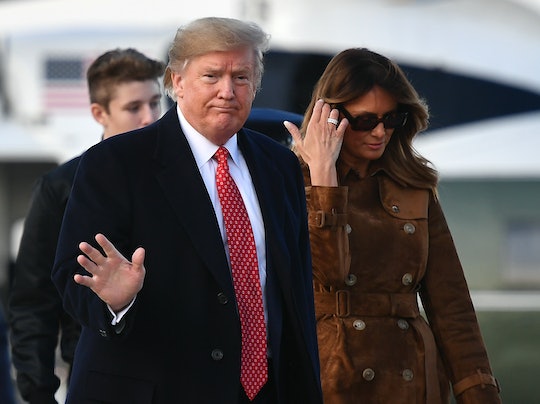 Trump's Thanksgivings Typically Include A Trip To Mar-a-Lago

Between 24-hour news coverage and President Donald Trump’s own Twitter feed, it feels like we know everything there possibly is to know about the POTUS and his family. But they've been surprisingly discreet about their holiday celebrations over the years, including what kinds of traditions the Trump family has for Thanksgiving.

Not much is known about the traditions of the first family before they took office. Though Trump was one of the most monetarily successful Americans, the media didn't spent much time looking into how his family spent their holiday season. It might be safe to assume that he spent it at his Manhattan Trump Tower penthouse, where he spent most of his time living prior to the presidency, according to Forbes, or at his Mar-a-Lago residence in Florida.

But if more recent years are any indication, it’s likely that convening at his Florida estate, Mar-a-Lago, is among their Thanksgiving traditions. In November 2016, just after the election, Trump and his family gathered there for a 24-dish feast that included traditional turkey and sides, but also a selection of seafood, beef tenderloin, leg of lamb, salads and eight different kinds of dessert, according to NBC News. And in 2017, the president returned to Mar-a-Lago with his family, for what was said "to be an opulent affair,” according to CNN, held inside the private clubhouse.

In 2018, the Trump family returned to his Palm Beach home and hosted a large dinner with "turkey, a salad bar and seafood," according to The Hill. And this year, perhaps unsurprisingly, Trump will return to Florida for Thanksgiving, according to USA Today.

There are a few presidential traditions surrounding Thanksgiving that Trump has kept up. Both Presidents George W. Bush and Barack Obama made phone calls to service members on Thanksgiving Day, according to Reuters, and Trump continued that tradition in 2017, calling troops in Afghanistan, Iraq, Turkey, Bahrain, and on the USS Monterey. That same year, both the president and his wife visted a nearby Coast Guard station, providing food to service members and their families.

Trump has also, of course, kept up with the pardoning of the turkeys tradition. In 2019, according to CNN, Trump pardoned two turkeys named Bread and Butter, while joking about efforts to impeach him: "It seems the Democrats are accusing me of being too soft on Turkey. But Bread and Butter, I should note that unlike previous witnesses, you and I have actually met."

While not much is known about what actually happens within the walls of the president’s family’s Thanksgiving celebration, it seems like they celebrate together, presumably at Trump's Florida estate.

This article was originally published on November 17, 2018