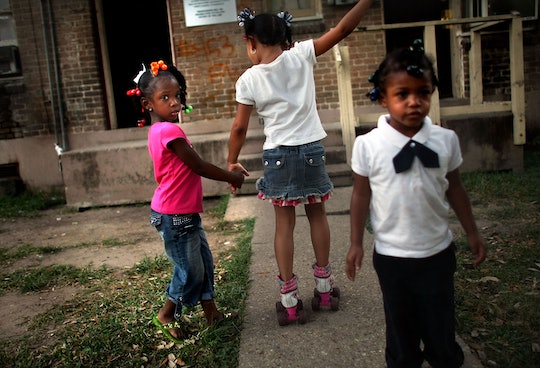 The belief that children should be nurtured and protected doesn’t exactly extend to all children, according to new research. A report published this week by the Georgetown Law Center on Poverty and Inequality showed that adults were more likely to assume that black girls were older, more independent, more responsible for their offenses, and more knowledgeable about sex — basically, more adult-like — than white girls of the same age. Sadly, that may come as no surprise to those of us raising black daughters (or who were once black girls ourselves). But the realization that adults view black girls as less innocent than white children explains so much about how black girls are treated by figures of authority, to be honest. Schools, police departments, and the justice system are run by adults and when those adults don't actually see black girls as girls... so many horrible things can happen.

The report, Girlhood Interrupted: The Erasure of Black Girls’ Childhood, is actually the first to explore adult perceptions of black girls. Building on prior research on how adults perceive black boys, Georgetown researchers looked at data from 325 adults from different racial and ethnic backgrounds and educational levels across the United States. They found shocking differences in how those adults viewed girls in mid-childhood (ages 5-9) through early adolescence (ages 10-14).

According to the report, survey participants believed that black girls needed less nurturing, protection, and comforting than their white peers; that they were more independent or older than they really were; and that they were more knowledgeable about sex and other adult topics than their white peers. I think that bears repeating: a survey of adults believed that by kindergarten, black girls knew more about sex than white girls.

USA Today reported that the clear sexualization of black girls was among the more difficult findings for study authors to comprehend. “The fact that you think a (black) 5-year-old is more knowledgeable about sex is amazing to me," said co-author Jamilia Blake, an associate professor at Texas A&M University. She went on to explain that the overall erasure of black girlhood is rooted in harmful stereotypes of black women in general:

One reason this might be occurring is because black girls are being held to the same stereotypes we have of black women. Black women have historically and currently been seen as being aggressive, loud, defiant and oversexualized. And I believe, along with many other researchers, that the stereotypes of black women are being mapped on to black girls. [...] When this stereotype is put on girls at a young age, it robs them of the naiveté of being a child.

As one might expect, those negative assumptions have had real-world implications for the safety and health of black girls. Teachers are more likely to discipline black girls for subjective infractions, like dress code violations, loitering, or being “disruptive.” As a result, black girls are suspended from school at more than double the rate of white girls, and often without the educational support it takes to keep them on track to graduate, according to the U.S. Department of Education. That also places them at higher risk than their white peers for interaction with the juvenile justice system, where they are more likely to be detained and charged with a crime, according to the report.

And if children are being given “adult status” when it comes to being responsible for their own actions, it could explain why relatively little attention is given to the hundreds of black and Latinx girls that go missing each year. For example, earlier this year, outrage on social media caused DC area police departments to address viral photos of dozens of missing black girls in the area. Their explanation — that the girls weren’t actually missing, but had simply run away from home — makes more sense in light of the Georgetown study. When adults believe that black girls don’t need protection, it becomes easy to also believe that she has the ability to decide for herself to leave home, despite the dangers and risks.

The study authors hope their findings change these dangerous perceptions, USA Today reported. “We urge legislators, advocates and policymakers to examine the disparities that exist for black girls in the education and juvenile justice systems and to pursue reforms that preserve childhood for all,” Blake said.

Let’s hope that happens. Because black girls are just as entitled — just as deserving of equal treatment and protection — as white children. They deserve to just be children.

More Like This
Meena Harris’ New Children’s Book Tells ‘The Truth About Mrs. Claus’
20 Heartwarming Episodes To Help Prepare Your Child For A New Sibling
Jason Ritter's Family Cannot Appreciate His Culinary Talents
All The Nights The Grinch Airs On TV In 2022