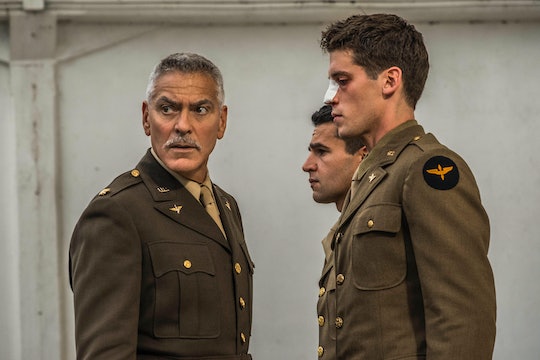 Hulu favors a slow and steady pace for releasing their original programming. The two Hulu originals premiering in May both have an element of psychological terror. Into The Dark: All That We Destroy is Jason Blum's horror series that releases one episode a month based on a holiday. Into The Dark is the Mother's Day episode. According to Hulu's press release, "A geneticist who fears that her son may be becoming a serial killer, creates a group of clones in an attempt to cure him of his psychopathic tendencies by allowing him to relive the murder of his first victim." That synopsis has me terrified of both mother and son. The episode premieres May 3.

I'm slightly less scared of Catch-22 perhaps because the cast is full of so many recognizable actors I'm intrigued. George Clooney, Kyle Chandler and Hugh Laurie star in the series which is based on the novel by Joseph Heller. It's the story of Yossarian (Christopher Abbott) a a US Air Force bombardier in World War II who believes thousands of strangers are trying to kill him.

According to Hulu's press release for the show — "His real problem is not the enemy, but rather his own army which keeps increasing the number of missions the men must fly to complete their service. Yet if Yossarian makes any attempt to avoid his military assignments, he’ll be in violation of Catch-22, a hilariously sinister bureaucratic rule which specifies that a concern for one’s own safety in the face of dangers which are real and immediate is the process of a rational mind; a man is considered insane if he willingly continues to fly dangerous combat missions, but a request to be removed from duty is evidence of sanity and therefore makes him ineligible to be relieved from duty."

When you think about it too long, it's absolutely petrifying. Yossarian literally needs psychological help to control his thoughts about sinister strangers. But the only people who can help him are the ones who have trapped him in a situation that will probably kill him. This, by the way, is where the term "catch-22" comes from.

Clooney will play Scheisskopf, and he asked Chandler to play Yossarian's commanding officer Cathcart, who is in charge of making all of these rules. "My initial reaction was, ‘No, I’m not going to remake Catch-22,’” Chandler says. “But then I read it, and immediately I was intrigued. The role is not really quite like anything I’ve done before. [Cathcart’s] insane," Chandler told EW.

I'm probably going to have to read the book before I watch this series because the element of humor here is still going completely over my head. This sounds terrifying? "It’s about the madness of war,” an executive producer on the project, Luke Davies told EW. "It’s also hilariously about the madness of the bureaucracy of war, which is a different matter. And it’s about the experience of powerlessness that we all have.” Yep, all of that still sounds horrifying.

In any case, whether or not I pluck up the courage to actually watch these new offerings, the point is that Hulu is not messing around when it comes to quality content.