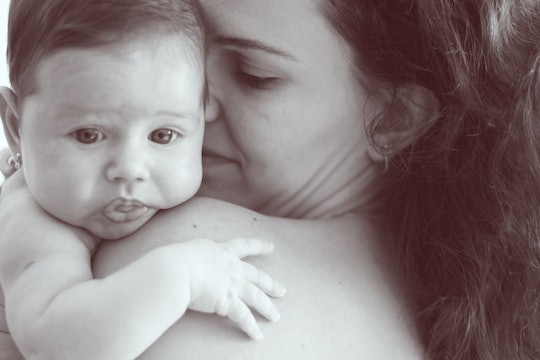 The Unique Way Canada Is Normalizing Breastfeeding Will Seriously Impress You

Considering the fact that breastfeeding is literally the act of nourishing a little one the way nature intended, everyone all around the world should be onboard with women doing it in public. And a big part of getting there is exposing people to the idea as much as possible, which is why the way Canada is normalizing breastfeeding will seriously impress you. Specifically, the recently launched campaign in one Ontario city — the installation of cardboard cutouts of breastfeeding moms in public spaces — is ingeniously simple, delightfully pervasive, and about as to-the-point as it gets.

If all goes according to plan, seeing the cutouts in places like restaurants and stores in Timmins, Ontario, will help people to view it as NBD when they spot a woman breastfeeding in the flesh. According to a press release from the Porcupine Health Unit (PHU), which is behind the aptly named "Breastfeeding in Public" campaign, the fact that the cutouts are of four real mother-child pairs who actually live in the community should work to drive home the point even more.

As is generally the case in the United States, women in Timmins are legally protected in their decisions to breastfeed in public. But public disapproval of the practice can prove to be a deterrent anyhow.

Women in Northern Ontario, where Timmins is located, for example, are the least likely to breastfeed in the whole region. PHU Public Health Nurse with the Growing Healthy Families Program, Meagan Potvin, said she believes they may be discouraged from continuing to do so after just a few weeks because of the social challenges associated with breastfeeding in public, according to Babble.

After all, so many women have been told to cover up, asked to relocate to a private space, or otherwise treated unfairly while breastfeeding out in the open. In the United States, a Virginia mom recently responded via Facebook live stream after being told to stop nursing in church. In Illinois, another mom was dismayed and outraged when a pool manager suggested she breastfeed in the bathroom. The list goes on and on. So, the "Breastfeeding in Public" campaign aims to create a citywide safe space for moms in Ontario, as Potvin told HuffPost:

This campaign wasn't necessarily just to push the idea of breastfeeding, but to make sure all mothers feel supported and that they have the information to make the best decision for their families when it comes to feeding their infant — whether that be breast milk, formula or both.

According to HuffPost, the campaign includes an Indigenous woman and a mom breastfeeding her 2-year-old to diversify and create a fuller picture picture of what breastfeeding can and does look like. But the movement isn't limited to the cutouts. Using the hashtag #BreastingInPublic, any mom can share her breastfeeding story on social media to promote normalization. It may seem like a small thing, but it can make a huge difference.