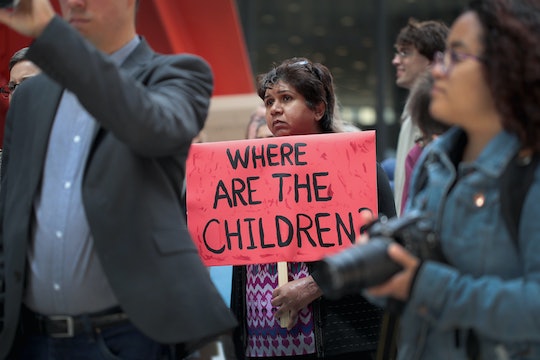 The United Nations Has Called On The U.S. To Stop Separating Migrant Kids & Parents

As a refresher, children are now routinely separated from parents suspected of illegally entering the United States. These kids are then put in protective custody while the parents are prosecuted, The Guardian reported. A "zero-tolerance policy" for prosecuting "illegal aliens" was announced in April by Attorney General Jeff Sessions. “If you are smuggling a child then we will prosecute you, and that child will be separated from you as required by law,” Sessions said, during a May 7 law enforcement event in Arizona, TIME reported. “If you don’t like that, then don’t smuggle children over our border.”

Um, just no. This is not only extremely terrifying on principle, but what about the actual trauma experienced by these terrified children? And their parents?

This policy is so concerning, in fact, that the United Nations Human Right Office is calling for the U.S. to "immediately halt" the practice, ABC News reported. "We are deeply concerned that the zero tolerance policy recently put in place along the US southern border has led to people caught entering the country irregularly being submitted to criminal prosecution and having their children — including extremely young children — taken away from them as a result," a statement released today from spokeswoman for the UN high commissioner for refugees, Ravina Shamdasani, read. The letter went on to explain that separating families in this manner is "arbitrary and unlawful interference in family life, and is a serious violation of the rights of the child."

Shamdasani also pointed out that the U.S. is literally the only country in the world that hasn't ratified the UN Convention on the Rights of the Child, Newsweek reported. Even though the rights of children "are generally held in high regard in the U.S.," the UN is still calling us out. The letter continued:

The use of immigration detention and family separation as a deterrent runs counter to human rights standards and principles. The child's best interest should always come first.

Shamdasani ended her statement with a call to action. "The US should immediately halt this practice of separating families and stop criminalizing what should be an administrative offense — that of irregular stay or entry in the US."

We call on US authorities to adopt non-custodial alternatives that allow children to remain with their families and fulfill the best interests of the child, their right to liberty and their right to family life.

A quick look at critical Twitter reactions to the letter shows they have ranged from, "Who cares? Screw the UN," to, "Well then they shouldn't have come to the U.S. illegally." Which is to be expected from those who support President Trump and his administration's policies — regardless of how inhumane they may be. However, plenty of others on Twitter strongly support the letter. "No kidding," one person tweeted. "Anyone with an ounce of compassion or an iota of humanity knows that. Regardless of how they got here, ripping families apart is barbaric."

Others, while supportive of the letter's intent, are lamenting over the fact that this is what it's come to: The UN calling the U.S. out for human rights violations. "We used to me the moral compass of the world. It’s amazing how fast we have fallen," one Twitter user pointed out.

Another Twitter user acknowledged, "It really is time for the UN to intervene here. We've entered the crimes against humanity stage."

Regardless of individuals' thoughts on separating children from their parents at the border, it's difficult to argue that the UN calling for the policy to end isn't a big deal, or a look into how the rest of the world is probably viewing this administration's policies. Ripping apart families has real and lasting effects on children, and the international community is telling us that it must be put to an end.