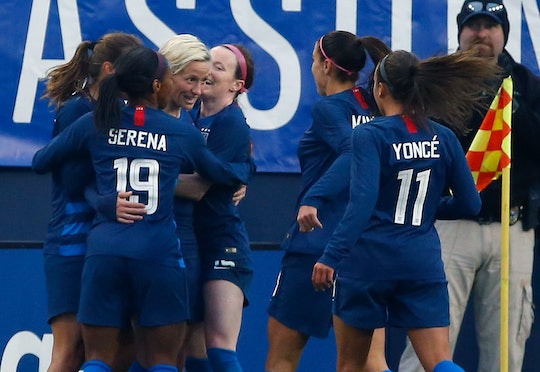 The U.S. Women's Soccer Team Wore The Names Of Famous Women On Their Jerseys

The team took the field with the names of iconic women across their backs in place of their own as they took on England at the Nissan Stadium in Nashville, according to the outlet. Each player chose a women that inspires them to grace their jersey during the game. Per CNN, Goalkeeper Ashlyn Harris said she chose Cardi B because she's unapologetically herself.

"She's just her and doesn't care being normal and fitting in and being ordinary. I can appreciate that. She owns her story, all of her story. I think all of us can learn something from that," Harris said.

Meanwhile Mallory Pugh, who plays forward on the USWNT, opted to wear Beyoncé's name across her back during the match. She told U.S. Soccer that she chose the "Sorry" singer because of her confidence, and the fact that she's "a good role model for women."

"She's confident and is just a good role model for women in general because she represents something that is so much bigger than herself," Pugh said. "She's inspiring in her industry and all over the world. She is a person who allows and shows women that they can be who they are and flaunt it."

"Dissenting opinion, battling cancer and then showing up to vote...what can't she do," Sauerbrunn told U.S. Soccer. "I just think she's amazing."

Andi Sullivan, who selected MLB analyst Jessica Mendoza, told U.S. Soccer that she chose Mendoza because she's a trailblazer. "I picked Jess Mendoza because I really admire her breaking boundaries in sports," Sullivan said. "When I was in school, I got to hear her speak about persevering through challenges and people doubting her and I think that was really helpful for me to help me believe in myself."

The team played a tough game, according to Stars and Stripes FC. The game ended in a draw. The women's team will face Brazil on Tuesday, according to the outlet. It's unclear if the team will take the field wearing their powerful women jerseys again.

The SheBelieves Cup started in 2015 as a precursor to the FIFA Women's World Cup, according to the U.S. Soccer website. It just so happens to fall on Women's History Month this year, which the site called "perfect" timing.