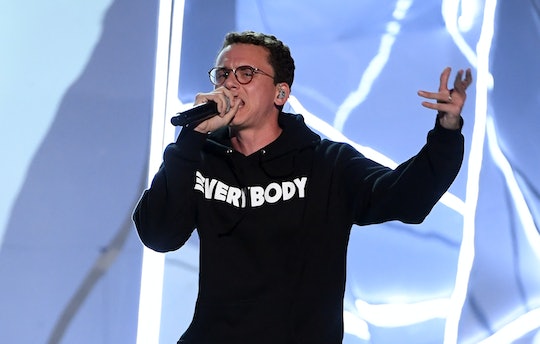 The VMAs Suicide Prevention Performance Was So Well Done

You never know what kind of struggles people are going through until you are in their shoes. Suicide awareness is something that constantly needs to be brought up because it can and does save lives. This could not be made more clear during the 2017 MTV Video Music Awards because the VMAs suicide prevention performance was perfectly done and touched so many people.

Kesha took to the stage to introduce the incredible performance done by artists Logic, Alessia Cara, and Khalid of Logic's song, "1-800-273-8255" which is named after the phone number for the Suicide Prevention Line. "It has been said that if you knew who walked beside you, you would never experience fear or doubt again," Kesha said while introducing the song. "The truth is piercing and the truth is what matters. The truth is none of us are alone."

Kesha is so right about that. Because as soon as Logic took to the stage to share his incredibly emotional and uplifting song with the world, he was joined on stage with dozens of survivors who had attempted suicide. The image of all of them standing up together on the stage was powerful. Yet, the power is less in the sheer numbers of people on stage (which was impressive) but the fact that Logic's song and VMA performance has the potential to change so many lives.

Logic's song not only has an amazing title but the lyrics are worth paying attention to, too. In the song, Logic talks about feeling hopeless, but then calling the Suicide Prevention Line, and then finding the will to live. "I want you to be alive," Logic said in the lyrics. "You don't gotta die today...I want you to be alive."

With so many people tuning in to the VMA's tonight, the performance will have had to touch someone out there. But the reality is, it already has. According to XXL, after the song made its debut on Logic's album in April, the hotline received a 27 percent increase in calls than they typically get on that same day during the week. That is absolutely amazing to hear, and definitely proves that Logic's powerful VMA performance will have some kind of impact on someone out there.

It was hard not to miss the hotline's number during the performance, but if you did, here it is (one more time) for good measure. If you are feeling hopeless or worthless, there is someone out there who wants to listen to you. Call 1-800-273-8255. You are not alone.