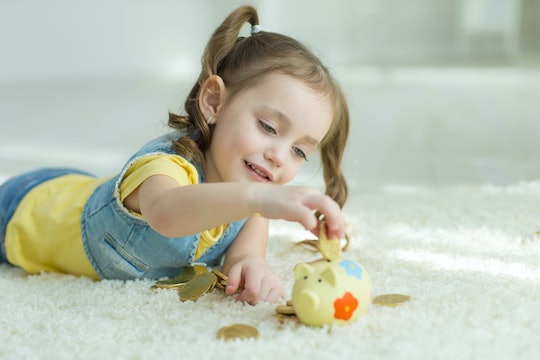 Turns Out, The Wage Gap Is Real For Young Girls, Too

Research has made it clear that women, overall, make less than men for the same amount and type of work. Account for race and other factors, and the disparity in salaries grows. Advocates have worked tirelessly for years to make equal pay for equal work a reality for women. But this isn't just an issue for adults. Turns out, the wage gap is real for young girls, too. Because why wouldn't it be?

A new study from BusyKid, a kid chore and payment app, has found that parents pay their sons a higher weekly allowance for doing chores than they do their daughters, according to MarketWatch. How much more? Results from the 2018 BusyKid analysis show that the average girl makes $6.71 per week for chores they perform, while the average boy makes $13.80 per week, MarketWatch reported.

In other words, sons earn more than double what daughters do, on average, per week.

To reach these findings, BusyKid combed through data from 10,000 families that have downloaded the app, which allows kids to earn, track, save, and invest their allowance, MarketWatch reported. And not only did that data analysis find that boys earn more in allowance, but were also awarded larger bonuses, too, according to the study's results.

As multiple studies have proven, the gender wage gap doesn't get that much smaller when you enter adulthood. The average working woman takes home 80 cents to every dollar a working man earns, according to the American Association of University Women. If you're also a mom, you'll make even less, too. Recent data from the National Women's Law Center revealed that, on average, moms who work full-time, year-round, only earn 71 cents of a working dad's dollar.

And single mothers earn considerably less on average than working mothers who are married, according to the Economic Policy Institute. How much less, overall? Single working mom earns 57 cents for every dollar a dad makes — and that's across race and ethnicity, EPI research has shown.

But the disparity in income is even worse for women of color — single or married — making the wage gap a racial justice issue, too. Working Latina mothers take home 46 cents to a dad's dollar, while Native American moms earn 49 cents, and Black moms make 51 cents, NWLC data revealed. White moms, on the other hand, make 69 cents to a father's dollar, while working Asian American-Pacific Islander moms earn 85 cents, according to NWLC data.

It's worth noting, though, that the wage gap between girls and boys is a bit more complicated than equal pay for equal work.

BusyKid CEO Gregg Murset told CNN Money that the types of chores performed by sons and daughters, respectively, may drive the differences in wages. That means parents may not intentionally decide on allowance rates based on gender, Murset said, according to CNN Money.

As he explained to CNN Money:

There's a difference when it comes to the types of chores that boys and girls typically do. Let's say cleaning the bathroom versus mowing the lawn. Harder jobs typically require a little bit more pay. If you're going to mow a lawn for three hours, that's a beast, a tough job. Maybe us as parents are giving our girls chores in the house that don't take two or three hours outside, and there's a difference in the pay scale.

Even with that explanation, though, the wage gap still comes down to gender. Some parents are determining what their kids can handle based on what's considered "men's work" and "women's work," which means they're reinforcing gender stereotypes that research has shown are detrimental to children.

And it's not just with the type of work, but how said work is supposed to be viewed by boys and girls. Yasemin Besen-Cassino, sociology professor at Montclair State University and author of The Cost of Being a Girl, said that girls are seen as natural caretakers, and are expected to focus less on money than boys, according to DiversityInc.

They're also not expected to ask their parents for raises, Besen-Cassino told DiversityInc. She continued:

We put this extra pressure on girls, especially the ones who do care work, that money is in opposition to care. That would translate to chores as well, that they would be seen as not helping the family. The minute something is monetized for women, it's seen as not loving and caring and being a team player.

In the end, BusyKid's study gives parents an opportunity to reevaluate their own gender biases towards chores and work. You can't change the way the wage gap works in adulthood — that's something for lawmakers and businesses to tackle and destroy. But there is no reason to perpetuate the disparity in earnings and its consequences in your own home.

More Like This
Mom On TikTok Asks Daughters Why They Want To Be Boys & Same, Girls, Same
Reddit Backs Mom Who Got Scolded By Teacher For Not Inviting 30 Kids To Birthday Party
A Dad Asked Reddit If His Wife’s “Casual” At-Home Wardrobe Was Setting A Bad Example
A Parent’s Guide To Stomach Pain In Kids
What Parents Are Talking About — Delivered Straight To Your Inbox