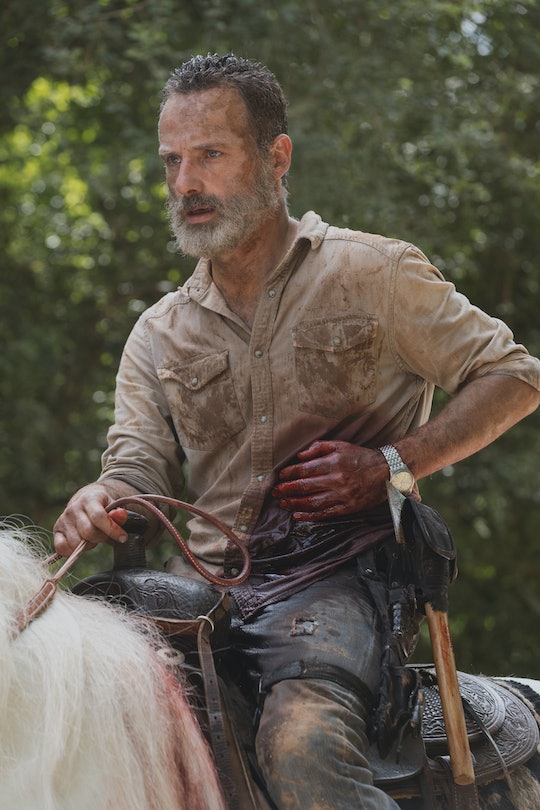 Rick's Last Episode Of 'The Walking Dead' Was An Emotional Rollercoaster

Just when you thought things couldn't possibly get more bleak than they already are on a post-apocalyptic zombie show, Rick’s last episode had to bring all the feels. There have been hallucinations of dead characters before, but when The Walking Dead brought three major characters back for Rick’s last episode, it was hard to handle. Maybe even harder to deal with than the fact that Rick himself appeared to be dying from an impaled pipe to the stomach, of all things.

Episode 4, "The Obliged," left off with Rick’s fate uncertain. In his efforts to try and secure the bridge to the surrounding communities, he fell off his trusty horse and right onto a metal rod sticking up from a pile of debris. To make matters worse, walkers were coming at him from every direction and there seemed to be no escape in sight. Luckily in Episode 5, "What Comes After," his horse came back, and he climbed on top, but not before already bleeding out more than someone who survives a pipe to the stomach should. He wasn’t at his best and in Rick’s final episode of The Walking Dead, he revisited three major characters of the series whose deaths he no doubt considered to be his own fault.

The first hallucination Rick had as he bled out and wandered around was Shane, his former partner and best friend. Shane is also Judith’s biological father, which some fans conveniently forget. So when he asked Rick how his "baby girl" was doing, it was rough. I’m talking tears all around and rightfully so. For those who don't remember (how could you not, though?), Rick stabbed Shane in the chest back in Season 2 when Shane went off the rails in a jealous rage about Rick's wife and Judith's mom, Lori.

During Rick’s hallucination, the former friends were in the same patrol car they’d been in during the series premiere and it was as though nothing had changed between them. Only Rick was the current version viewers know now. He snapped back from the hallucination right before a walker attacked him, but it might have been the closest call Rick had yet.

Rick’s hallucination of Hershel was different. It seemed almost peaceful, despite Hershel dying at the hands of the Governor back in Season 4. But he told Rick that everything would be OK and that Maggie, too, would be alright. It was almost like he was telling Rick that it was OK to let go, but suddenly Rick was awake yet again.

As a viewer, you have to wonder where Hershel and his family would be now if Rick and the others had not insisted on staying at the farm earlier in the series. As it stands, Hershel’s daughter, Beth, and son-in-law, Glenn, are both dead and he himself died, but there is the chance that Maggie could rise up as the next Rick, so to speak. That would almost make the deaths tolerable. Almost.

Rick saw Sasha last as he hung on by a thread in Sunday’s episode. In a much darker scene than Hershel’s hopeful sequence, Rick saw the bodies of those who had died and those who were still alive. Sasha, who sacrificed herself during Season 7 to save others at Alexandria, was among those in the heap of bodies. And her “message” for Rick was a little more cryptic than the others.

When he said for the third time that he was looking for his family, she replied that they weren’t there because they aren’t lost. Could this mean that Rick is lost right now and will be lost for the foreseeable future? As in, he won’t make his way back to the group, injured or not? It’s hard to say right now, but Rick’s last episode of The Walking Dead sent him off as the hero he tried to be for the duration of the series so far.

All Rick ever wanted was to help literally everyone else and build a society for the remaining survivors. The return of so many beloved characters at a time when Rick was on his way out on The Walking Dead made his exit more emotional than some fans had probably anticipated. But in his absence, the rest of the characters will be forced to pick themselves up and keep his dreams alive.