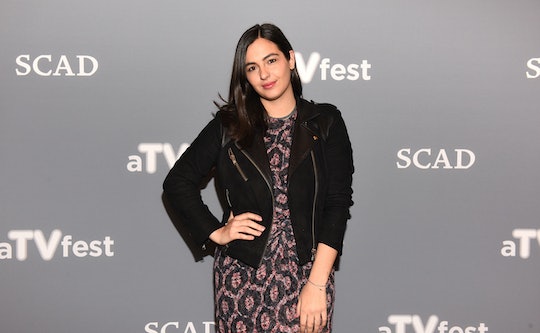 A few Instagram trolls have just learned a hard lesson: don't mess with a woman who kills zombies for a living. After receiving some nasty comments on a recent photo after her character's triumphant return on Sunday, The Walking Dead’s Alanna Masterson confronted body shamers just like Tara would – with force, conviction, and some slightly coarse language, for good measure.

(Mild spoilers for The Walking Dead Season 7 Episode 6 follow.) Masterson's character, Tara, has been absent from the show since last year, off with Heath on an extended supply run. But the real reason viewers hadn't seen her is because in real life, she was pregnant. Sunday marked her return, and the entire episode revolved around Tara as she got separated from Heath, faced a horde of mummified zombies, fell off a bridge and nearly drowned, was almost gunned down more than once, and finally went back to fight that same horde once more. Again, she had just given birth. Masterson appeared on Talking Dead following the show and revealed that she did all her own stunts in 105-degree heat, taking breaks to nurse her newborn daughter, who was in an air-conditioned tent on set. All that so that some random man could criticize her body on Instagram.

On Wednesday, Masterson shared a picture of her daughter, now one year old, with the following caption:

Dear Instagram trolls, body shamers, and the men and woman who think it's ok to comment on my weight: I hope that you don't have children. And if you do, I hope you teach them about kindness and acceptance. I hope they learn that it isn't ok to make fun of people or call people names. I hope one day YOU learn what it takes to be a parent. A kind, selfless parent. A working parent. A parent that puts themselves in someone else's shoes. Maybe you can't get it through your thick f*cking skull, but nursing a baby for a year (and pumping in a van between takes, in the dead of summer in Georgia) is a lot of work, determination, and scheduling. So before you decide to make a comment about my chest being "too large" or how "fat" I've become, just know that this little girl got the best start to life. I wouldn't have changed it for a second. I would've gladly continued to eat enough calories to produce milk for her little bones to grow. Also, grow the f*ck up. Your mother should be ashamed for raising such a judgmental bully. I'm sure she knows how "courageous" you must be for trolling and hiding behind your Iphone and computers. P.s. I would LOVE to see any man or woman give birth to a baby, nurse the baby, and then work 17 hour days and NAIL their own stunts. P.s.s. Be kind to each other. We need it now more than ever.

Masterson's weight obviously had little impact on her ability to do her job, as she ran, jumped, climbed, and fought her way through the episode, making it look nearly effortless. And regardless of how much she weighs and what her reasons are (and yeah, breastfeeding a newborn is a good one), that's nobody's business but hers. I'd be proud to have her on my zombie team. It's clear she won't back down for anyone, living or undead.