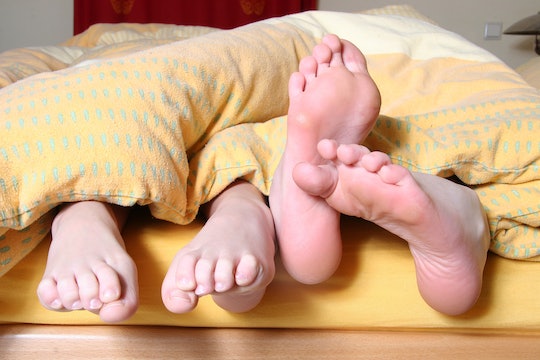 How Millennials Parent Is Affecting Their Sex Lives, Science Says

I didn't have sex for a while after I gave birth to my son. I had an emergency C-section, which meant my bottom half was off limits for longer than I wanted. But even when I was all healed up, my partner and I couldn't find our way to the sack even if we tried. We're exhausted, frankly, and sex can be a lot of work. Turns out, there's a reason for that: Parenting. And here's how parenting affects millennials' sex lives, according to experts.

How does that tie to parenting? Well, experts interviewed by CNN theorize that parents today (aka millennials) are far more involved in their children's lives than before, and that leaves less time and energy for intimacy. Essentially, being a helicopter parent is zapping your energy, leaving you too drained to get between the sheets.

A lot of parents feel like they've already done about 50 things they didn't want to do that day, like getting up at dawn, dealing with their child's tantrums. Adding sex to the menu just seems like too much. So we turn to things like Netflix to unwind, which leads to immediate gratification with zero energy expended.

I can't say Lutz is wrong. My partner and I were all ready to get it on Tuesday night, but we binged-watched USA's Playing House instead. So how do you reignite that spark? Well, it's a matter of applying the same stringent rules to your sex life that you do parenting. According to Redbook, there are at least 10 ways you could have more sex as a parent. And some of the advice doesn't have to do with the physical act itself; you could take time to sext, use mutual masturbation as a quick way to release tension, and set bedroom boundaries for your children.

Granted, you two won't become sex machines overnight. But it's important you also talk with your partner about your concerns and needs. Open communication will make it easier to explore your desires while you navigate life as a parent.

The results of the study are nothing new, by the way. According to the Washington Post, a 2016 study published in the Archives of Sexual Behavior found that younger millennials are having less sex than the generations before them. Similar findings were released in 2015 by the same journal, TIME reported.

In other words: Parents, you're not alone.