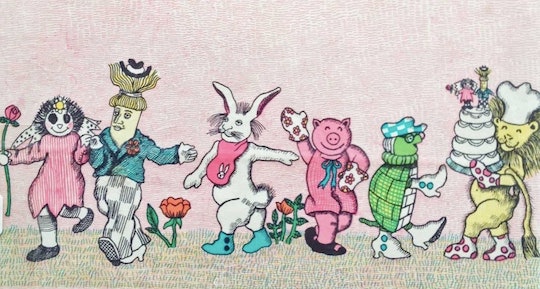 More Like This
32 Children's Books With Asian Characters That Celebrate Heritage, Joy, and Childhood
My Best Mom Friend Is A Dad
We Should Really Stop Using The Phrase "Put Up For Adoption"
My Mom Friends Saved Me From The Hole Of Postpartum Despair

This is the plot of Carl Sandburg’s picture book The Wedding Procession of the Rag Doll and the Broom Handle: The Rag Doll, whose best friends include the queerly masculine Whisk Broom and Coffee Pot, as well as the (cross-dressed?) Furnace Shovel, loses her glass eyes after getting banged around by a careless child, and the Broom Handle, in his white high-heeled boots and white lipstick — his broom-straw hair kind of tied back like dreadlocks — replaces her eyes with glued-on prunes. So she marries him. And we never see our newlyweds again, because the rest of the book — the bulk of the book — concerns itself with the procession of wedding entertainers, including the Spoon Lickers, the Tin Pan Bangers, the Chocolate Chins, the Dirty Bibs, the Clean Ears, the Easy Ticklers, the Musical Soup Eaters, the Chubby Chubs, and at the end of it all, the Sleepyheads.

There is almost no way to overstate the weirdness of this book. The acid-trip story is illustrated with acid-trip drawings, some of them four-color, but most of them exclusively pink, white, and black. Children and monkeys tickling each other with their toes have uncannily adult faces and unsettlingly thick eyebrows. A rabbit turns out to be a grim-faced child in a rabbit costume; a mouse-costumed child riding a tricycle turns out to be an actual child-sized mouse. On a page of fairly regular human Chubby Chubs there’s a pig wearing a sailor suit and oven mitts. A pajama-clad, thumb-sucking Sleepyhead dozes inside a crescent moon that turns out to be the yellow beak of a night-cap-wearing bird.

The book is a merry frolic of queerishness and ambiguity, multiplicity and pure oddness.

The language is weird too — chanting, repetitive, and whimsical. “The Chubby Chubs were next. They were roly-poly, round-faced smackers and snoozers. They were not fat babies — oh no, oh no — not fat but just chubby and easy to squeeze.” My own kids, like me before them, cried out “oh no, oh no,” because at some point in our long history with it, various parts of the book had become a call and response. Every spread ends with the guests doing their oddball thing, and looking around, and doing their oddball thing again: “They marched on their chubby legs and chubby feet and chubbed their chubbs and looked around and chubbed their chubbs again.” I have read these lines approximately ten trillion times, after my own father read them approximately ten trillion times to me, from the same falling-apart copy that is bound in blue packing tape.

I loved this delightfully bizarre book, and my kids loved it, too (not least because of the Spoonlickers, who licked from their spoons such yumminess as butterscotch, gravy, and marshmallow fudge). But why on earth would I showcase it, in this particular political moment, when I could promote, say, something from my friend Kate Schatz’s brilliant Rad Women series? Or, really, any book not from my own childhood, filled as it was with racist and antifeminist representation. Mrs. Alfalfa seemed nice enough in Richard Scarry’s Busy Town, but she, like the other females in that series, was defined by her relationship to a working male. They were mothers, wives, and homemakers, and they didn’t have careers. (Not that the racialized, fruit-stealing Bananas Gorilla himself had what you would exactly call a career.)

This is no small thing in our moment, when it is almost — and sometimes actually — a crime to be weird.

So who was this Carl Sandburg, creator of the prune-eyed doll bride? I looked him up on Wikipedia, like one does, and was happy to see that, in addition to being a writer and a poet, he was a socialist and folksinger, a husband and father. He was the first white man to be honored with the NAACP’s Silver Plaque Award “as a ‘major prophet of civil rights in our time.’” It’s not that we couldn’t enjoy the book if he’d been an a-hole, but it’s complicated, isn’t it? (see, for example, Annie Hall. Sigh.)

But, then, it makes sense to me that he wasn’t an a-hole. Because this is a book about, and for, weirdos. It’s a celebration of strangeness. There’s a certain rare absence of morality, an absence that I treasure in children’s literature. What a relief to read a book that’s not about sharing or tidying up! Nobody learns a Hard Lesson in the sand box or cafeteria; nobody is guilt-tripped into making their grandma a Valentine or giving up their yogurt to a hungry baby brother. Instead, there’s a celebratory procession of messiness and chubbiness, of the urge to laugh and taste delicious things and make a lot of noise. The book is a merry frolic of queerishness and ambiguity, multiplicity and pure oddness. This is no small thing in our moment, when it is almost — and sometimes actually — a crime to be weird.

The book ends with my kids’ favorite say-along line: “It was a grand procession, don’t you think so?” And it really was. It really is, still.