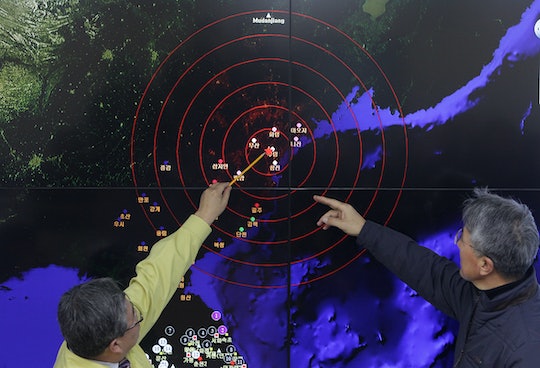 On Wednesday, the White House said North Korea’s claims it tested a hydrogen bomb were “not consistent” with reports from Asian monitoring stations, according to The New York Times. And the U.S. isn't alone in its doubts. South Korea has also expressed skepticism about North Korea’s nuclear weapons capabilities, but why would North Korea lie? It's all about power struggles.

Following the United Nation's condemnation of North Korea’s tests, White House press secretary Josh Earnest relayed findings from Asian monitoring stations and also announced that nothing has happened in the past 24 hours which would have Washington perceive Pyongyang's military any differently, according to NBC News. However, he noted that the government is still investigating North Korea’s claims.

Though South Korea detected an “artificial earthquake” earlier on Wednesday, analysts from the country are questioning North Korea’s claims that it was a hydrogen bomb test, according to Business Insider. Lee Cheol-woo, a member of the intelligence committee of the South Korean National Assembly told reporters that a hydrogen bomb would have produced “hundreds of kilotons or, even if it is a failed test, tens of kilotons (of energy),” according to the Times. However, Lee said the bomb set off by North Korea was only a magnitude 4.8 seismic event, smaller than the country's February 2013 nuclear test — which wasn’t a hydrogen bomb and estimated in the 4.9 to 5.2 range.

But why would North Korea lie? North Korea possibly lied about having a hydrogen bomb in the past, according to NBC News. In December 2015, Kim Jong-un claimed the country developed the nuclear weapon. However, senior defense and intelligence officials struck down his comments, saying that North Korea lacked the capabilities to create an atomic bomb. "They have not even conducted any single test and now they make this claim — there's no way for us to believe it is true," North Korea expert based at the China's Central Party School, Zhang Liangui told NBC News. He explained why North Korea would fabricate such a story:

Analysts also believe that North Korea is passing these tests off as a hydrogen bomb because of Jong Un's prior grandiose statements. Some experts believe the announcement could be a ploy to call attention to the ruling party congress in May — the first to occur in 35 years, according to the Daily Mail.

Regardless of whether North Korea’s statements are true, it clearly has a ton of countries alarmed. Not only because they fear what the nation would do with such a dangerous object in their hands...but what ulterior motives they may have if they’re lying.