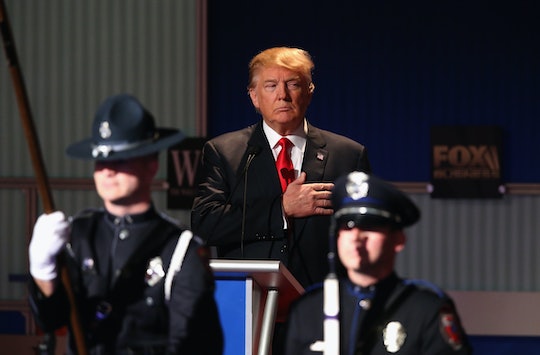 Trump has said some crazy things on the road to the White House so far, and the latest debate was no exception. Still, while the fourth GOP debate brought some choice Donald Trump quotes, most of what he said was a whole lot of the same stuff we've heard before. Broadcast live from the Milwaukee Theatre in Milwaukee, Wisconsin, the debate was slated to focus on the economy with an emphasis on jobs and taxes. The subject matter itself is probably what led to a slightly more subdued discussion. But still, a lot of what Trump said leaned on what he's said before. In other words, there was a whole lot more of the “we need to build a wall” stuff, but nothing exactly to the level of his "I love Mexicans!” comment.

So what were The Donald's best sound bites? Here are just a few.

One of the first questions thrown to Trump had to do with the minimum wage. But when asked if he sympathized with low-income Americans who hoped to see the minimum wage raised to $15 an hour, he point-blank said nope: "They have to get into the upper stratum ... I will not raise the minimum."

His Comments About The Court's Ruling Against President Obama's Immigration Plan

"I was so happy yesterday when I saw that decision come down!" exclaimed Trump, when commenting on the president's immigration plan that was shot down just yesterday. "That was a great day. We have to stop illegal immigration it's causing tremendous difficulty when it comes to drugs." The decision Trump spoke of was the president's plan to protect 5 million undocumented immigrants from deportation, a move that would have incredibly devastating impacts on not only the economy, but also millions of families.

When He Continued On With All That "Wall" Talk

"I like Ike," said Trump, in reference to 34th president Dwight D. Eisenhower. "[He] moved one million and a half illegal immigrants out. We have no choice." Trump then reminded us of one simple fact he seems to think we've forgotten about: "We're a country of laws," he said. "We need borders. We will have a law, the wall will be build, the wall will be successful." Of course, Trump's "wall" plan also comes along with a plan to deport 11 million people from the country, something Kasich was quick to point was kind of impossible, not to mention unrealistic.

When He Said We Don't Have Smart People

While discussing his feelings on trade, Trump stressed that he's pro-free trade. But what he also drove home is that the people we have dealing with trade negotiations are... well, not smart. "We need smart people, we don't have smart people negotiating," said Trump, echoing some of his other infamous campaign quotes so far. (Like that time during the first GOP debate when he said, "Our leaders are stupid, our politicians are stupid, and the Mexican government is much smarter.")

"We are losing jobs like nobody's ever lost jobs before," said Trump, at one point during the debate. What his comment seems to ignore, though, is the fact that in reality, the unemployment rate is at an all-time low of 5 percent.

When He Proved He Knows Nothing About TPP

"If you look at the way China and India and almost everybody takes advantage of the United States, China in particular, because they're so good," said Trump, while talking about trade dealings. "It's designed for China to come in as they always do through the back door and totally take advantage of everyone." But in what was one of the more memorable moments of the night, Sen. Rand Paul jumped in to correct Trump. Paul quickly pointed out that in fact China is not included in the Trans-Pacific Partnership (or TPP) agreement that was signed on Oct. 5. China is absent from the treaty, which does include 12 countries on along the Pacific.

Although the race to the Oval Office is no laughing matter, Trump’s performance during the debates has given pundits (and all of Twitter) plenty to snicker about, and tonight was no exception. (Seriously, the memes kind of just write themselves.)