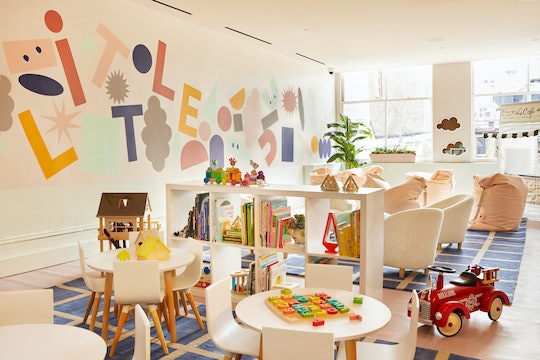 For female digital nomads, having access to community work spaces can feel like a lifeline, especially if that space happens to be The Wing. This women-focused, members-only professional club, currently with locations in New York City, Washington, D.C., and San Francisco, not only lets you work in the comforts of a beautifully appointed "office" alongside inspiring professional women, but also offers empowering events, speaker series, and community-building activities. This week, they're servicing their members in a whole new way with the launch of The Little Wing, a kids' area complete with babysitting services within their Soho, New York City flagship — a real game-changer for career-driven moms.

As a working mom myself, I have held both office and remote positions, and it turns out neither are great for childcare. There's still daycare drop-offs and pick-ups, or the unique challenge of coordinating with, and trusting in, a nanny. I have yearned for there to be a communal work space with quality on-site childcare, but that's like finding a unicorn. Now The Wing, founded by Audrey Gelman (a former press aide to Hillary Clinton during her 2008 presidential campaign) and Lauren Kassan, is changing that with the launch of The Little Wing.

The Little Wing will open its doors on January 30, and will offer childcare services and children's programming to its Wing members. While The Little Wing will only be located at the flagship SoHo office initially, the company intends to eventually expand the program to their other The Wing locations — and hopefully it will set an example for all business about the kind of childcare services that working mothers want and need.

"By offering a solution for our members who are parents, we want to help contribute to a world where there is no perceived motherhood penalty. One of the greatest barriers to working as a parent is lack of flexible work schedules and access to affordable care, and with the opening of the Little Wing, we hope to serve as a solution to both of those issues," explained the company's COO Kassan in an interview with Forbes. Of course it's important to stress that to be able to take advantage of The Little Wing's incredibly beautiful facilities, you'll have to join first: membership to The Wing starts at $215 a month or $2,350 a year. It may seem a hefty price tag to some, but considering how great the facilities are (there's a cafe, beauty room, showers, and more, endless networking opportunities and programming), and that many people are simply not very productive working from home, some might consider it a great value. (In comparison, a WeWork membership starts at $45 a day or $220 a month depending on the city, but the basic package is limited and you might find yourself paying just as much as a Wing membership, if not more, for additional add-ons.

According to a company spokesperson, 25 percent of The Wing members are parents, and the majority of those have children under the age of 6, so there was an unmet need for onsite childcare services. The Little Wing seeks to answer that need by offering a variety of childcare options in a gorgeous setting. The soothing, Instagram-friendly play space was designed by The Wing's in-house design team, Laetitia Gorra and Nicola Kehoe, with furnishings by Crate & Kids.

The Little Wing's babysitters, dubbed Wingsitters, are available for children ages 1 to 6, and are priced at $25 for two hours. Each sitting situation boasts a small Winglet to Wingsitter ratio. There are also weekend 'Open Play' hours (9 a.m. to 1 p.m.) priced at just $25 per day, that are available to Wing family members (dads, grandparents, etc.).

And since The Wing is known for offering empowering programs to its adult members, The Little Wing will follow suit, offering enrichment classes for its littlest members ($28/class), teaching music and movement, art, yoga, and early literacy development. The Wing members will also have the option to sign up for parenting workshops ($35/class) that will tackle everything from sleep training to returning to work after parental leave, as well as free parenting support groups.

While I no longer live in New York, I know that this is exactly the kind of space I would be clambering for if I did live there. And seeing businesses like this, that take into account the needs of a modern working mother, makes me hopeful that more will spring up all around the country.

Edit note: This article was updated to reflect the company's membership policy to include GNC, non-binary, and trans members who may not identify as women; and the correct price of a WeWork membership.