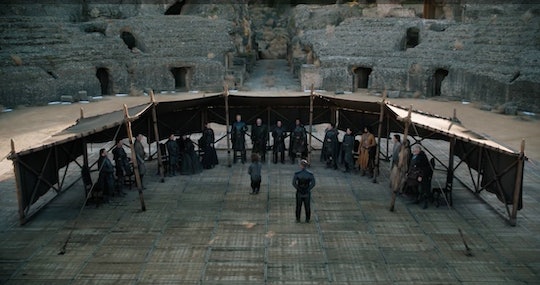 Fans Had Mixed Feelings About The Winner Of 'Game Of Thrones'

Admittedly, there were endless combinations of possible endings, but the winner of Game of Thrones was finally chosen in the series finale and the sort-of elected leader who took over after Daenerys' death left fans feeling a little unsatisfied. Despite viewers' hopes of seeing a woman on the Iron Throne, that ending never came to pass — mostly because Daenerys' sole surviving dragon melted the thing to a smoking heap of metal after discovering she was dead. So Dany was out as a Mad Queen candidate, thanks to Jon, and there wasn't even an Iron Throne to ascend.

In a meeting between the remaining leaders of the great houses of Westeros, gathered to decide upon Tyrion's fate for betraying the queen, Tyrion suggests that they choose a new leader amongst themselves. Taking a page out of Dany's book (bestowing power upon people so they don't come for her), Tyrion suggests Bran as the best choice for a new leader, and proposes that each subsequent leader thereafter should be chosen by the lords and ladies of Westeros, as opposed to by hereditary succession. It was an odd choice, and one that fans deemed a little anticlimactic, especially with — as many of them pointed out — Sansa sitting right there. Plus, after two seasons' worth of Bran insisting he can't be ruler of anything because he's the three-eyed raven, his enthusiastic acceptance of the position was a little bit of a stretch.

But, all was not lost for the Lady of Winterfell. She secured the North's status as an independent kingdom, free from the rule of King's Landing, and went home to sit on its throne as the Queen in the North. Arya, who many wanted to see serve as the hand of the Queen, if not sitting on the Iron Throne herself, decided to change her major to "explorer" and commissioned a fleet of Stark ships to discover what lay west of Westeros. And, for what it's worth, Arya the Adventurer does have a pretty good ring to it.

Jon was exiled right back to the the Night's Watch for murdering the queen, which is where he started, but also the closest thing to "home" that's not Winterfell. Bran named Tyrion his hand, rescuing him from whatever grisly fate Grey Worm was plotting. (Grey Worm, by the way, finally sailed for Naath.) And Tyrion made quick work of assembling a King's Council, which actually came together pretty functionally. Bran remained unenthusiastic about being named King Bran the Broken, but everyone who thought Jon should rule for that reason couldn't deny that the same principle applied to Bran.

Meanwhile, Bran appointed Tyrion to be his hand precisely because Tyrion didn't want the job either. Fans didn't get much insight into the kind of ruler Bran planned to be, except that he stayed in his lane, volunteering to track the missing dragon while people better suited for the practical tasks tended to them. It may not have been the emotional grand finale fans hoped for, but a slightly ill-fitting ruler makes sense for a show that has always operated in grey areas.