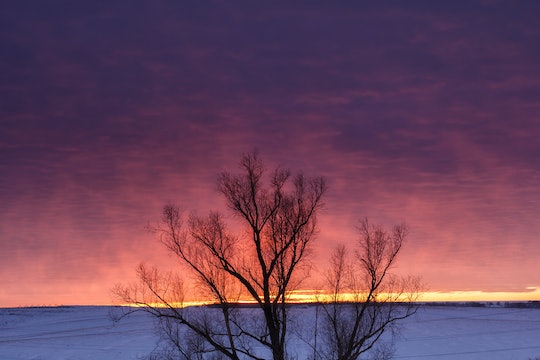 If you're like a lot of people on this planet, 2017 was maybe not your best year ever (and that's probably an understatement). But at least it's almost over, right? Not quite! If you've been consoling yourself with the idea that the worst is certainly behind you, well, we're very sorry to tell you that this might not be the case. According to astrologers, Winter Solstice will be the worst day of the year, and not just because it's the shortest and darkest date on the calendar.

We know what you're thinking: The worst day? Of 2017?! That's saying a lot. Why does the universe hate us so much?

Alas, the cosmic forces behind this unwelcome turn of events are much, much bigger than anything happening here on Earth. In fact, the planetary event set to send us into a collective funk hasn't occurred in over 350 years. Astrologer and author Neil Spencer told the Daily Mail that for the first time since 1664, the Sun will move into Capricorn on December 21 — shortly after Saturn also moves into Capricorn, causing the sun and Saturn to line up. Here's why that's potentially problematic: Capricorn is fated to have a hard time through the end of the year, as astrologist Susan Miller tweeted, and when the sun is in Capricorn the rest of the zodiac will be affected, too. And the fact that Saturn will also be in Capricorn only makes the situation that much more fraught, said Spencer:

"In one's personal horoscope, Saturn in Capricorn is a very useful placement, denoting one tough individual, but on a macro-level, it doesn't promise much in the way of fruitful change."

Ugh, seriously? Right about now you're probably trying to figure out how to get away with staying under the covers all day on Thursday — and honestly, that might not be the worst idea. Spencer cautions that starting anything new on December 21 could have unpleasant "long-term consequences" and is "ill-advised" (yikes!). He also warns that pretty much everything you do might feel more challenging than usual. And you didn't even think that was possible!

Perhaps the lack of sunlit hours on the solstice is nature's way of telling us not to leave the house on this most ominous of days. The science behind the darkness is actually rather fascinating. In case you need a refresher: The Telegraph reports that Winter solstice happens each year when the Sun reaches its most southern point, directly overhead the Tropic of Capricorn. The Sun is closer to the horizon than at any other point in the year, and the North Pole is tilted farthest away from its light (hence the early darkness).

It's a significant occurrence, even if most of modern society is generally too busy wrapping presents and hiding elves on shelves to give it much thought. One notable exception: Thousands of visitors still descend on Stonehenge to mark the occasion every year (archaeologists believe the ancient site was constructed to face the Winter Solstice sunrise). Traditionally, the Winter Solstice — also known as Yule — was celebrated as the beginning of the sun's return, or darkness turning into light, and incorporated such symbols as holly, mistletoe, and evergreen boughs (hmmm, sound familiar?).

So clearly, Winter Solstice has been considered a meaningful, mystical time for thousands of years — which makes this year's prediction seem even more disturbing. But there is a way to put a positive spin on these events, astrologer Maressa Brown tells Romper:

"Saturn is considered the taskmaster planet, and it's conjunction (or pairing up) with the sun could mean you're challenged in a significant way. But there is a silver lining. Only through being challenged can we learn and grow. So, yes, while you may have to deal with limitations, frustration, or aggravation of some sort around a Sun-Saturn meet-up, it's also a chance to do hard work, feel accomplished, and learn a tough lesson that ultimately brings you closer to achieving a long-term goal."

So think of this year's Winter Solstice as an opportunity to take stock of your current situation and think about what changes you might want to make in the coming months to get closer to where you want to be. Just, uh, wait until after December 21 to put those changes into effect.