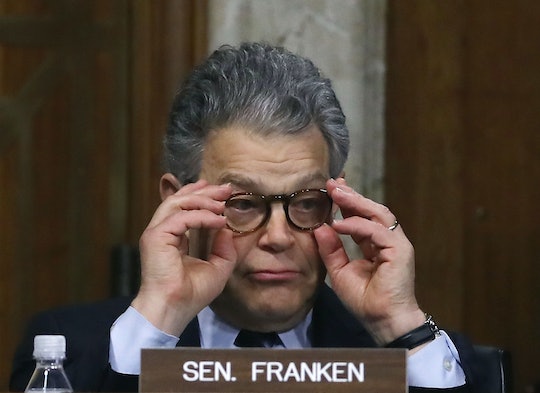 As more politicians, big-name Hollywood producers and other public figures continue to be outed over sexual harassment allegations, the responses of those close to these men continue to make headlines as well. Friends and co-workers — woman friends and co-workers, at that — publicly defend these men, making excuses for their behavior. Most recently, Al Franken has been thrust into the spotlight amid allegations from more than a decade ago. Now, Tuesday morning, former women cast members of SNL came out in support of Al Franken, proving we're still taking care of badly behaved men.

On Tuesday morning, NBC News reported that three dozen women who worked with Franken during his years on Saturday Night Live have spoken out in defense of his character. (To be clear, these aren't current cast members of SNL.) In a letter, these women condemned the Minnesota Democrat's actions toward radio news anchor Leeann Tweeden, whom the lawmaker allegedly kissed and groped against her will back in 2006. "We feel compelled to stand up for Al Franken, whom we have all had the pleasure of working with over the years on Saturday Night Live (SNL,)" the statement to NBC News reads. "What Al did was stupid and foolish, and we think it was appropriate for him to apologize to Ms. Tweeden, and to the public." In the same breath, they also defended his character, writing:

In our experience, we know Al as a devoted and dedicated family man, a wonderful comedic performer, and an honorable public servant. That is why we are moved to quickly and directly to affirm that after years of working with him, we would like to acknowledge that not one of us ever experienced any inappropriate behavior; and mention our sincere appreciation that he treated each of us with the utmost respect and regard.

This letter comes after another woman, Lindsay Menz, came forward on Monday, alleging that Franken had grabbed her buttocks while posing for a photo in 2010 at the Minnesota State Fair, according to CNN. In a statement, Franken said of the claims, "I take thousands of photos at the state fair surrounded by hundreds of people, and I certainly don't remember taking this picture. I feel badly that Ms. Menz came away from our interaction feeling disrespected." However, Franken did admit his transgression against Leean Tweeden. He even issued an apology, according to CNN.

While it's certainly refreshing that a man accused of sexual harassment has actually acknowledged his actions and apologized, it doesn't change the fact that it happened. Nor does it absolve him of the crime. And a bunch of former co-workers stepping up to essentially say, "Well, he never did that to any of us," does nothing to help matters. I can't understand how any of the women who signed this letter think it's OK that Franken has violated at least two other people, and think that it shouldn't affect his career. Because that's essentially what they're saying. I mean, seriously. There's no need to keep count of the people he hasn't harassed — that's not something you get a trophy for, especially when you're an elected official. These victims are actual people, and their experience matters.

In fact, women have pretty low standards for men if their respecting us on the job is considered good behavior. That should be a bare minimum at this point. Franken's defenders claim he's a "family man." Well, this family man has also been photographed groping a woman. Other defenders of men who have allegedly sexually harassed women blatantly call out the victims as liars. Or, maybe they were "asking for it." The list of excuses goes on and on. But here's the thing: Harassment isn't just disrespectful — it's legally and morally reprehensible. Sorry, but standing by a man's "character" in the midst of serious allegations only undermines victims' stories.

I'd venture to argue that this line of thinking is what leads to inadequate punishments for offenders like Brock Turner, who sexually assaulted an unconscious woman. Turner was sentenced to six months in jail, followed by three months of probation — but was released after only serving half of his six-month sentence, according to CBS News.

Women should hold men accountable for their actions and stop making excuses for sexual harassers. Otherwise, we're only enabling the continuation of abuse.