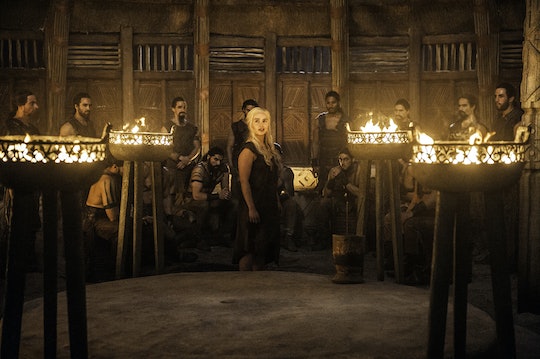 The Women On 'Game Of Thrones' Season 6 Have Taken Control, & It's About Time

Game of Thrones has gotten a lot of criticism over the years for its treatment of female characters. While George R.R. Martin and the showrunners have all claimed that they're just trying to depict the gruesome realities for women in this fictionalized Medieval Europe, it has sometimes felt a bit gratuitous. For example, do we need to have at least one topless scene in every episode? They got the most flack perhaps for the scene in which Ramsay rapes Sansa, which felt wholly unnecessary to the plot. Perhaps the showrunners have heeded the public's complaints, or maybe this was always intended to be a story arc, but the women on Season 6 of Game of Thrones have been the major power players driving the action in every episode. Even the once-insufferable Sansa has grown into a woman to be reckoned with, and I am absolutely loving it.

When put in the hot seat, at the mercy of about three dozen gross dudes, Daenerys proved herself to be more powerful than ever. Sansa is using all the power and leverage she's got to take back her home and rescue her brother. Melisandre was the real hero who brought Jon Snow back to life, and in case you forgot, it's the gloriously salty Lady Olenna who's got the power in King's Landing these days.

Let's take a look at all the women on Game of Thrones who are currently giving me life goals.

So she lost the Kingsmoot. The patriarchy is real in the Iron Islands, and though she is obviously the most qualified for the job, having actually led the Ironborn through some rough times, they would apparently prefer to be ruled by Euron Greyjoy, otherwise known as the Donald Trump of Westeros, who is all aggression and penis jokes. A setback, but cannot stop this badass woman, who then had her brother help her steal the two best ships in the fleet to get to the Dragon Queen before Euron and his newly constructed fleet – the best fleet in the world, the most tremendous fleet, that Mexico, sorry, someone else, is going to pay for.

Remember when we all kind of hated Sansa? She liked Joffrey even when Arya rightfully called him out for being the worst. She made fun of Arya for being a tomboy. And when things got bad she did little more than mope and snap at Shae. That Sansa is but a distant memory these days. She will never be duped by Littlefinger again, as she told him in a seriously skin-tingling speech, asking him what he thought Ramsay did to her, forcing him to confront his own actions. She is also the most eager and ready to take back Winterfell from the Boltons. She convinced Jon to get up and fight rather than brood, and she suggested her uncle the Blackfish, who can give them men to back their campaign. She's not just part of the conversation, she is leading it.

Dany has always been a queen and a badass but to be honest, she's been pretty ineffectual and almost, dare I say it, boring the past few seasons. But when she finds herself in a jam, as she did when facing the Khals and the question of what was to be done with her, she absolutely kills it. Nobody does theatrics better than Dany. Episode 4 she simply tipped over the torches lighting the tent, set everybody ablaze, and walked out unharmed to the stunned masses. Then she collected her new Dothraki army and was on her way. Khaleesi is back, you guys.

Yes, we're all very glad that Jon Snow is back to life, but let's not forget who actually brought him back. She may have been wrong about Stannis, and the whole burn a child alive at the stake thing was a very bad idea that I'm not ready to forgive, but Lady Melisandre is really powerful and you want her on your side. She's feared and respected by pretty much everybody (except maybe Varys) and that is giving me goals.

Episode 5, the waif told Arya that she'd never be No One, she'll always be Arya Stark. Which is kind of exactly how we want her. Though the waif continues to beat her day in and day out, Arya's fighting spirit has not ebbed, and somehow I doubt that she'll be obedient for much longer. Part of what makes Arya such a fantastic character is her commitment to her own goals, to the exclusion of all else, even if it would be good for her. She's a flawed character, but admirable none the less.

This list doesn't even mention some of the other women who have been driving all the action lately, including Lady Olenna, Meera Reed, Brienne of Tarth, and Margaery Tyrell. The women rule the stage this time around on Game of Thrones, and I hope it stays that way.