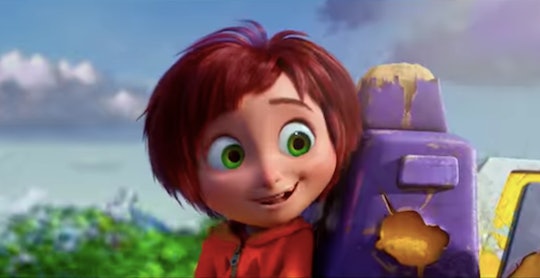 Parents & Kids Are Going To Be So Excited For 'Wonder Park'

I'm calling it right now, folks. The next movie your kids won't be able to stop watching (over and over and over) is the new offering from Nickelodeon movies, Wonder Park. And after seeing the premiere of the Wonder Park Super Bowl trailer — I have to say I'm not against it. Though, there is a possibility that the movie will give your kids some dangerous ideas about homemade roller coasters it may be best to gently discourage.

Here is the premise. A young girl with a big imagination named June has been wreaking some neighborhood havoc with her imaginary amusement park called Wonder Park (it involves a ramp sliding from the roof and into the street, for starters). But everything changes when the world she imagined is suddenly real. Populated with brightly colored anthropomorphic animals and some really beautifully vibrant vegetation, June loves the world she has somehow created with only the power of her imagination. Not everything is perfect though. When her park comes under attack by chimpan-zombies (I don't know what these are either), she bands together with her new friends to fight back and save her park from destruction. For any kid who's ever dreamed up an imaginary magical world — it's the ultimate fantasy.

The full trailer premiered online before its official debut during the Super Bowl, so some football fans may have gotten a sneak peek beforehand. But whenever you watched it, I have a feeling that when the movie premieres in March, kids everywhere are going to be absolutely obsessed. Luckily, like many of the best movies made for kids (I'm thinking Inside Out or Coco), this one looks like the kind of thing that parents can appreciate *almost* as much as their little ones do. For one thing, the animation is absolutely gorgeous. For another, the movies boasts some A+ voice talent.

June's mother is played by Jennifer Garner, while Hollywood heavyweights including Kenan Thompson, Mila Kunis, John Oliver, Ken Jeong, and Matthew Broderick play some of June's friends. June herself is voiced by newcomer and wunderkind Brianna Denski. Something tells me this is one kid who will be appearing on television screens a lot more often in the future. So just go ahead and pencil that name down for future reference. What I'm saying is that this is a pretty stellar cast of voices here and I think everybody should get excited for this animated movie.

Another point in Wonder Park's favor? It doesn't look like a musical, so the chance that your kid will make you play a certain song from the movie so many times you can never hear it again as occasionally happens (cough, cough, "Let It Go"), seems minimal. No promises of course, but I don't think there will be much singing in this one.

Wonder Park, of course, is hardly the only kids' movie with a debut trailer during the Super Bowl this year. I'm thinking specifically of Toy Story 4, which may be the one movie everyone is even more jazzed about. Exciting stuff coming to a theater near all of us!