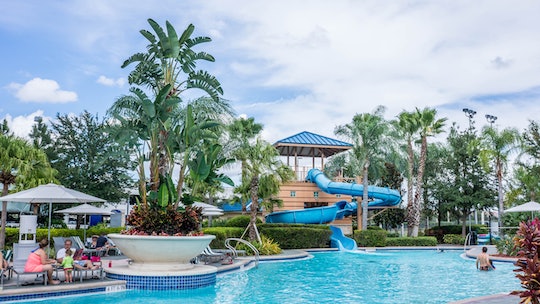 In the summer time, there is no better way to escape the heat than cooling down at the beach or the local community pool. But for the estimated 2.2 million people in the United States who depend on a wheelchair, accessibility to these places can be limited. This is why it is absolutely amazing that the world's first wheelchair accessible waterpark opened in Texas, making it easier for individuals with disabilities to be able to enjoy one of summer time's simplest pleasures.

Morgan's Inspiration Island in San Antonio, Texas which opens this Saturday is the first, all inclusive water park, open to everyone regardless of their ability or age. Parents of children with disabilities will no longer have to feel as if their child is missing out on fun — because the park encourages them to be an active participant in it. The Centers for Disease Control and Prevention estimates that one in five Americans have a disability of some kind and, as previously stated, 2.2 million Americans depend on a wheelchair for their day to day tasks. It's statistics like these that make you wonder why there are not more waterparks like this one all across the United States.

For those who do depend on a wheelchair every day, Morgan's Inspiration Island breaks down barriers for them and allows them to use six different splash pads with different themes and fun features. But it's something that the whole family will be able to enjoy, too.

Morgan's Inspiration Island promises to give individuals with physical or cognitive special needs a place where they can splash and play without barriers.

Morgan's Inspiration Island is a subset of Morgan's Wonderland, a theme park built for those with special needs in 2010. The theme park has rides and attractions built specifically for everyone, and in the past seven years has hosted more than 1 million visitors from all 50 states.

The water park is designed with all disabilities in mind. One area of the park has the ability to condition water to a warmer temperature so guests with sensitivity to the cold can still partake in the activities. The park also offers waterproof wheelchairs for those who have battery powered wheelchairs and can't afford to get them wet and offers wristbands to guests equipped with technology that allows parents to track their children who could wander off. For parents who have spent their child's life stressing out over making places more accessible for their child, it is incredible to find a park that accommodates all of their child's disabilities.

The park, according to Time, was inspired by Hartman's 23-year-old daughter Morgan who has "cognitive and physical disabilities." The inspiration shows in the water park itself, making it a place that everyone, not just those in wheelchairs, will be able to enjoy.