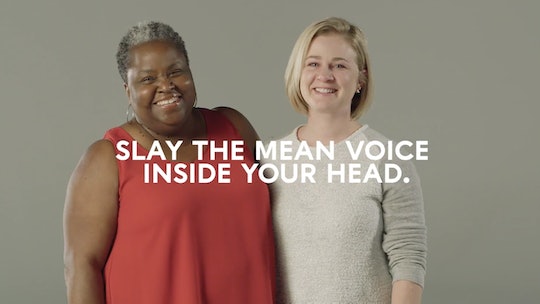 This Video Will Inspire You To *Finally* Stop Criticizing Yourself

What was the last terrible thing you said to yourself? Whether or not you're fully conscious of it, chances are your internal dialogue is pretty far from a pep talk... and you're not alone. Nine out of 10 moms live with "frequent or constant self-doubt," according to researcher and author Katherine Wintsch, as well as a "negative inner voice that they describe as 'the meanest mean girl they know.'" Now she's calling attention to this issue with an incredibly moving video made in support of her new book, Slay Like A Mother: How To Destroy What's Holding You Back So You Can Live The Life You Want.

A mom herself, Wintsch knows a thing or two about self-doubt and motherhood. When her own daughter and son were just three and one, Wintsch had the opportunity to study mothers in 17 countries around the world as part of her work as a strategic planner at a national advertising firm. Feeling "caught up in her job" at the time and "really unhappy," Wintsch hoped her research would give her the "keys to the kingdom," so to speak, in the form of time-honored mothering tips and tricks. Instead, what she brought home with her was the sad knowledge that the number one emotion moms from all across the globe had in common was... self-doubt. As troubling a discovery as this was, Wintsch did find an unexpectedly silver lining.

"It was so freeing to know other women were struggling," she tells Romper. "But I also felt like if we're all struggling, maybe we should talk about it." Thus began what Wintsch calls a "2-year self-help journey" involving lots of therapy, working with a life coach, countless self-help books, learning to meditate, and watching "every rerun of the Oprah Winfrey show late at night with tissues and red wine."

The reason why women don't get help is because they're convinced that they're the only trash fire and everybody else is perfect.

"I so related to the pain she would draw out of people," Wintsch says. Through meditation particularly, Wintsch tried to "figure out why, with all my success, didn't I like myself or feel good about myself?" After going through the long process of turning self-doubt into self-compassion, Wintsch was compelled to write Slay Like A Mother, knowing that what she'd learned could help so many other women.

"I fundamentally changed so many things about myself," she explains, that it would have felt "selfish" not to spread the word. After doing a TED Talk on this subject that was shared over 40,000 times, Wintsch wrote (and re-wrote) her book proposal, finally landing an agent and a publisher who believed as strongly in her message as she did.

"The sentiments and thoughts that pump through our blood can either be filled with self-doubt or self-love, and you get to decide which one," Wintsch tells Romper. "It's overwhelming to realize that we're creating our own pain, but we can un-create it... the reason why women don't get help is because they're convinced that they're the only trash fire and everybody else is perfect."

That's where the "Slay The Mean Voice" video comes in, which Wintsch calls an extension of the book, specifically the "negative self-talk chapter."

"I think of the video as my proof point to the world that mothers are not at war with other mothers, we are at war with themselves," she says.

To create the video, moms (who were not given any information about the topic prior to the shoot) were asked, on camera, to write down the last terrible thing they told themselves. Next they were asked to read the cards aloud; first to the camera, then to each other. The resulting footage is nothing short of heartbreaking.

No matter how hard you might be on yourself, it's always somehow so surprising to see that other women think the same things about themselves: That they're not enough, that they're scarring their kids for life, that they're unattractive and altogether worthless. Even the men on the video set were shocked, according to Wintsch, with one camera guy in his thirties admitting that he "never would have thought the world needed this video," but "if all these women just said what they said, then this is an epidemic."

Other mothers say terrible things to themselves.

"They all have an 'oh sh*t, I had no idea!' moment and that says two things to me," Wintsch says of the men who've seen the video. "One, that these moms (and all moms) are hiding their self-doubt from the men in their life. Two, that if we expose this war within ourselves, that the men in our lives are there to help and support us."

If this video moved you in some way, chances are you're the exact right person to read Slay Like A Mother (so basically, if you're a mom or even non-mom who struggles with self-doubt). And what about the moms who made everyone cry with their index card readings?

"I’ve stayed in touch with all the mothers and I even invited them to attend a private launch party for the book because of their bravery and vulnerability," Wintsch says.

"I’m grateful for them helping me shine a spotlight on this issue and we’ve become close because of it. Many of them have said that it changed them — that they walked off the set as a different person than when they walked on — by highlighting the fact that they’re not alone. That other mothers say terrible things to themselves… and that knowledge, that they’re not alone, has given them the motivation to try and put an end to the war within themselves."