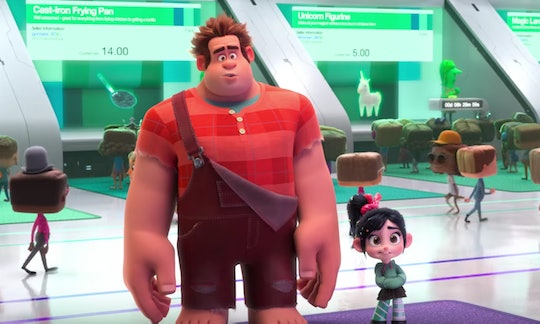 Some people might say animated films are just for kids, but let's be real — everyone loves them. So it's no surprise that kids, their parents, along with everyone else for that matter could not get enough of the animated film, Wreck-It Ralph, when it first premiered in 2012. And those same fans of that same movie should get pretty pumped, because the Wreck-It Ralph 2 trailer is finally here and yup, everyone's favorite stinkbrain is back.

It has been six years since Ralph and his trusty sidekick Vanellope von Schweetz first showed up in cinemas (and subsequently after that, TV screens) everywhere. If it's been a while since you saw the first film, here's a little refresher. In Wreck-It Ralph, the arcade game character also named "Wreck-It Ralph" is sick of his bad guy persona and tries to be a "good guy" by getting involved in the other video games in his arcade. Throughout his journey, Ralph makes some new friends and learns some things about himself along the way.

But, thankfully, he is back with an even more exciting story to rival the first. In this sequel, according to Rolling Stone, Ralph has to navigate the wacky world of the internet with Vanellope in what is sure to be an incredibly exciting adventure. In the trailer alone, Ralph encounters the temptation of pop-ups ads and useless (but valuable) goods on eBay. Of course, with the two characters navigating the internet, it hopefully won't remind you about your own slight addiction to shopping on Amazon late at night or scrolling through your social media feeds into the wee hours of the morning.

The film's official title, Ralph Breaks The Internet: Wreck-It Ralph 2, says it all — Ralph will more than likely get in some trouble or go on the biggest adventure of his life — when the movie comes out in theaters everywhere on Thanksgiving. Luckily there is a trailer that just came out on Wednesday to tide over your curiosity until its premiere on Nov. 21.

The best part about this trailer is that it is only a "teaser trailer," meaning the full trailer is due out sometime soon. And based on the contents of this teaser, the full trailer will be pretty dang exciting when it does come out. But the real question is — will this film be safe for all kids? Unfortunately, the film is not yet rated, according to the trailer. But this trailer is completely fine for all audiences, except for the bit at the end that insinuates a bunny being blown up (but nothing graphic is actually shown).

What you can do is look to the first film to get a good idea about what the sequel might be rated and if it will be OK for your child (of any age) to go ahead and watch. The first Wreck-It Ralph is rated PG, yet, according to Common Sense Media, the film is safe for those who are 7 years old and up to see. Parents for kids who are 7 and under might not agree with the movie, set inside of a world of video games that "mixes potty humor with strong messages," according to Common Sense Media.

But to balance out this humor, this first film is full of positive messages and role models, according to Common Sense Media, and on top of that, the movie was nominated for an Academy Award. With Ralph and Vanellope together again embarking on a whole new adventure, it's pretty much guaranteed that these positive messages and role models will return.

Who needs to get excited about turkey, stuffing, and all of the delicious food this Thanksgiving when Wreck-It Ralph 2 comes to theaters on the same day? Now there is another reason to be really excited for the holiday, even if it is a whole nine months away.

More Like This
Abbott Elementary's Sheryl Lee Ralph Received A Beautiful Gift From Beyoncé
Every State’s Favorite Halloween Movie For Kids In 2022
Disney Drops Strange World Trailer, A New Sci-Fi Movie About A Family Of Explorers
'The Proud Family: Louder & Prouder' Is Returning For Season 2 On Disney+