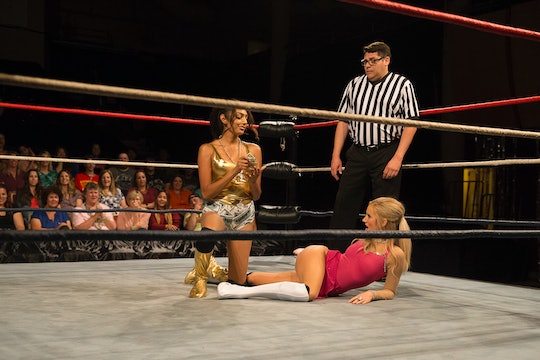 The Wrestling Group Date On 'The Bachelor' Made Twitter Uncomfortable AF

The Bachelor took some inspiration from the recent popularity of Netflix's GLOW and planned a women's wrestling tournament for one of Arie Luyendyk Jr.'s group dates. Unfortunately, the two real GLOW alums who coached the women on the date were super aggressive and disrespectful. Needless to say, the wrestling group date on The Bachelor made Twitter really uncomfortable, and fans had no qualms calling out the show for its terrible treatment of the contestants.

The date was dubbed "GLOB" — the gorgeous ladies of The Bachelor — and it turned out to be just as unappealing as it sounds. While most seasons of The Bachelor involve some kind of group date designed to target contestants with stage fright, GLOB took it to a whole new level. Instead of teaching the women some empowering tricks or helping them develop characters, the real GLOW Girls Ursula Hayden and Angelina Altishin skipped right to humiliating them and even pushing them around without their consent.

But to dislike being verbally and physically attacked doesn't make a person "un-chill."

The real GLOW wrestlers got up in Lauren B.'s face for laughing, even though she was clearly giggling out of discomfort and awkwardness. They called Bibiana "pathetic" and mocked her for expressing her feelings. Angelina even got vaguely racist, making fun of Bibiana for her name and of her mom for giving it to her. Bibiana ended up in tears, but Angelina doubled down on gaslighting the women, saying, "You're trying to earn Arie's love, right?"

Tia, Raven's friend, tried her best to be a good sport when learning a move from Angelina, but she wouldn't behave aggressively herself, which only riled the GLOW wrestlers up. Ursula went so far as to yank on Tia's ponytail behind her back while she was working with Angelina, and that definitely seemed to cross a line. Tia immediately walked out of the ring and went off by herself.

"It just makes me uncomfortable," she confided in Bibiana, who came to sit with her. "I don't want to be talked to like that."

And honestly, who would? A couple of the younger contestants complained that it was obviously just an act, and so it didn't make sense for some of the women to be crying over Angelina and Ursula. But not everyone signed up to be yelled at, shamed for their feelings, and physically taunted, even if it is "all in good fun." And the fact that one person can "take it" doesn't inherently make her any better that someone who can't or chooses not to.

"Something about that just rubbed me the wrong way," Tia explained. "I got bad vibes, it just doesn't feel good."

And Twitter was definitely on her side — and Bibiana's. Even ex-Bachelor contestants were disappointed in the date.

Even though the portion of the date that involved real GLOW wrestlers was kind of awful, the actual wrestling tournament seemed pretty silly and fun. Even Tia managed to have a good time once Ursula and Angelina left. For his part, Arie was pretty supportive of the women who were upset, and made a point of telling Tia that he was proud of her for going along with something that wasn't super fun for her. Bekah got the rose at the end of the night, but most contestants seemed pretty relieved just to have the date be over with.