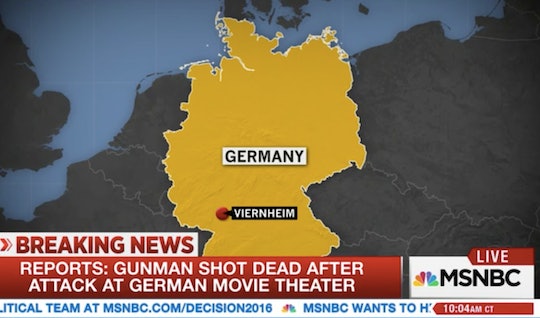 The Wrong Reaction To Have To The German Theater Shooting

Chaos and confusion erupted on Thursday in Viernheim, Germany after a lone gunman walked into a movie theater and reportedly opened fire. Early reports suggested that as many as 25 to 50 people had been injured, but later statements from local police confirmed that 20 theater's patrons had reportedly been tear-gassed, and that no other serious injuries had been recorded by authorities. According to police, the man had allegedly fired four unidentified shots into the crowd, although it wasn't clear what sort of weapon the man had actually used. None of this, however, stopped social media from blowing up in the immediate aftermath with the absolute wrong reaction to the German theater shooting.

"Germany-strictest gun laws in world, armed man locked in movie theater shooting people," one user tweeted. "Gun control advocates? Why so quiet? Where are you?"

"Germany has STRINGENT gun laws," another wrote. "Freaks will get guns no matter [what]."

Both tweets, along with the hundreds of others like them, will likely serve as purposeful propaganda in the pro-gun, anti-gun control lobby, fueling the NRA's fire to block commonsense legislation that might otherwise curb terrible outbreaks like the one the United States saw just two weeks ago in Orlando. And both tweets are absolutely, 100 percent wrong.

While it's true that Germany does in fact have some of the strictest gun laws in the world — anyone looking to purchase a weapon must prove a creditable reason for needed it and must purchase liability insurance, and owners are required to comply with stringent registry and storage measures which allow authorities to check in on them at any time — the theater incident on Wednesday was the first mass shooting the country has seen in seven years.

The last mass casualty shooting occurred in 2009, when, according to the Library of Congress database, an 18-year-old student at Winnenden opened fire on his classmates, killing 15. Before that, due to already tight gun control laws, the last recorded mass incident took place in 2002. (In that case, another student in the cathedral town of Erfurt murdered 16 people before turning the gun on himself.)

In between those shootings, there have been a smattering of limited-casualty gun incidents, such as a 2002 scare when a student in Coburg, Germany brought a gun to school, showed it off to classmates, and killed himself after accidentally shooting the school psychologist in the thigh as she attempted to get the gun from him; and a disturbing incident in 2006 when an 18-year-old gun enthusiast, who often played at being a combat soldier and dressed in military garb, shot and wounded five people before committing suicide.

Outside the country's school yards, the statistics are relative: In 2009, out of the country's reported 3,269 homicides, just 179 were committed with a gun — none of which were considered "mass shootings." The following year, those numbers were down to 147. For perspective, Germany has a population of 81.7 million.

Germany's gun laws themselves are a particularly tough, with current regulations requiring that buyers be at least 18 years old, have a proven reliability (meaning that they do not have a criminal record, association with known terror groups, personal disabilities, mental illness, or addictions), have been a resident for at least five years, and have a legitimate and proven need to own a weapon. Those able to prove a legitimate need — in this case, licensed "hunters, marksmen, members of traditional shooting associations, endangered persons, collectors, experts, producers and dealers, and private security firms," according to the country's weapons permit and gun license handbook — must comply with stated weapon acquisition limits and obtain separate permits for each, which are good for one year.

So of course — gun violence still occurs in countries like Germany, which is home to laws that would make most gun enthusiasts here in the United States faint. But there's no doubt whatsoever that it occurs much less frequently and at a less alarming level than the massacres so frequently seen here on American soil, thanks to the country's strict rules and regulations, and its dedication to limiting the number of privately-owned firearms in German homes.

As to the second point, that "freaks" will always find a way to get weapons, even in countries with tough legislation, that's also true. But it's only true to a certain extent. In fact, after Thursday's incident in Viernheim, German officials noted that they weren't even sure the weapon brandished by the suspect himself — an as-of-yet unidentified man who was shot dead by police on the scene — was even a real firearm. According to The Telegraph, the man may have been wielding a "gas or stun gun" based off of witness reports. Hesse state interior minister Peter Beuth said in a statement that authorities had "no information that anyone was injured" either.

"The assailant moved through the cinema complex, according to the information we have now, and appeared confused," Beuth said. "There were hostages inside and there was a struggle [with police] until in the end he was dead." All in all, while the incident was frightening and led many to fear the worst, no one was killed, and very few bystanders were affected in any serious capacity.

Yes, Germany has strict gun laws. Yes, there are ways for "bad guys" to get guns, even with those laws in place. But it's been seven years and counting now since the country's last mass casualty incident, thanks in part to a slew of commonsense gun legislation that further fine-tuned an already strict system of governance which allows responsible gun owners to obtain permits and keeps weapons largely out of the hands of anyone with a criminal record or known terrorist sympathizers.

Gun control advocates aren't "keeping quiet" because it doesn't fit with their narrative. There's simply nothing there to report.

Here in the United States? That's a different story altogether.