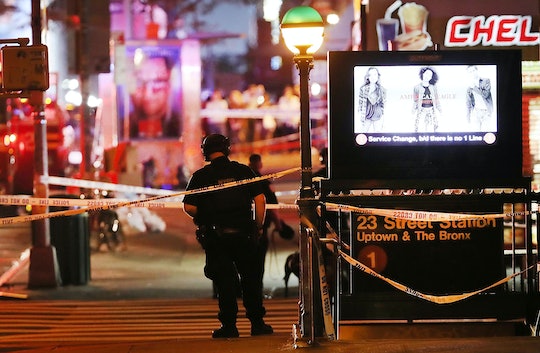 Residents and visitors of New York City were shaken to their cores on Saturday night when an explosion occurred on 23rd Street and 6th Avenue in the Manhattan neighborhood of Chelsea. The explosion reportedly left one person "seriously injured" and caused injuries to 29 other people. Another device was found a few blocks away, a short time later. Many people, including authorities, as of Sunday morning are trying to make sense of the explosion — but the absolute wrong reaction to the Chelsea Explosion is one we've all seen before, and it's one where people are quick to blame an entire group for the actions of a few.

New York City Mayor Bill de Blasio said in a press conference on Saturday night that the explosion was "an intentional attack" according to CNN, but de Blasio was quick to not put any labels on the incident, as he told reporters there was no evidence tying it to terrorism. "There's no specific or credible threat against New York City at this time from any terrorism organization," de Blasio said. On Sunday morning, New York Gov. Andrew Cuomo reiterated the fact that the explosion was not linked to international terrorism. "At this time there's no evidence of an international connection with this incident, but it is very, very early in the investigation and its just starting," Cuomo told reporters, according to CNN. "A bomb exploding in New York is obviously an act of terrorism but it's not linked to international terrorism."

Just because authorities have declared that the attack was intentional and an act of terrorism does not mean it has any links to any specific terrorist group or any group of people (in this case, the ones that everyone always jumps to when looking to make waves — "ISIS" or "Muslims") . Unfortunately, reactions to the Chelsea explosion from Donald Trump to Twitter users show that people have been unsurprisingly quick to blame others for this attack — from the media, to terror groups, and even specific religions.

This is not the first time that this has happened, but in an event with major uncertainty surrounding it — one that authorities investigating the explosion have said doesn't signal an immediate threat — people making awful assumptions about others stings particularly:

Donald Trump was quick to call the explosion a "bombing" during a campaign stop in Colorado Saturday night — even though responders were still on the scene at the time trying to figure out what happened, according to The Washington Post. Meanwhile, Hillary Clinton believed it was better to know the facts about the explosion before putting labels on it, according to New York Daily News., though she did speak to the media openly about it. "I think it's ... wiser to wait until you have information before making conclusions, because we are in the beginning stages of trying to figure out what happened," Clinton said.

In unfathomable situations like these, it seems like people want to just have someone to blame. In June, when one man carried out a deadly attack at a nightclub in Orlando, many people were quick to point fingers at Muslims before the details of the attacks were released. However, according to the Huffington Post, FBI data reports that 94 percent of terrorist attacks carried out in the United States between 1980 and 2005 have been by non-Muslims. So why is the public so quick to jump to conclusions?

In times like this, it is important to be thinking about the people who suffered injuries from the attack and considering the people in New York City who now have to live in fear because of it. There is still so many details that investigators, just like everyone else, are trying to figure out. Perhaps waiting, rather than jumping the gun, is the best course of action.