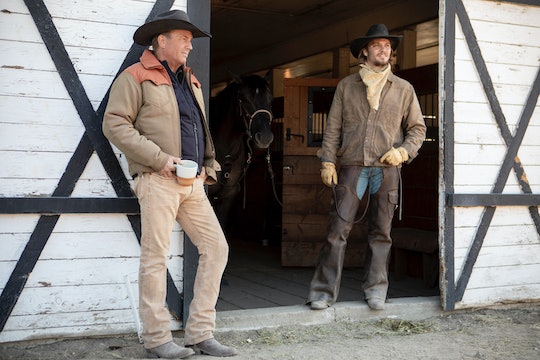 The 'Yellowstone' Cast Can't Wait For You To See Season 2

Sometimes, there's as much drama on a show's set as there is on screen. But it's a safe bet that the set of Paramount's hit western drama is full of admiration and respect, because the Yellowstone Season 2 cast is just as excited about the show's return as you are.

From the looks of things, everyone on the cast is a huge fan of their show and colleagues. They shower praises on each other while also making very convincing arguments that the new season is definitely better than the first.

First of all, these characters no longer need introductions. The show dives right into the drama, so you better be ready. "There's no more setting anything up or getting to know anyone," said Luke Grimes in the Paramount teaser video filmed on set. He plays the youngest Dutton son, Kayce. "Now it's just you can hit the ground running and take it as far as you want."

If the sneak peeks are any indication, creator Taylor Sheridan is going to take things pretty far, because the cast is amazed by the stories he's come up with. "[The show] is like a big book that you don't want to ever put town," said Denim Richards, who plays Colby, in the teaser. "Taylor's imagination is just so profound," he said. I've seen a man set on fire in previews, so I definitely believe all the hype.

There are going to be consequences from decisions that were made in Season 1, but a new season also means a new villain comes to town on Yellowstone. Malcom Beck (Neal McDonough) is "a wealthy business mogul who runs an area casino with his brother, Teal," according to Deadline.

But, Grimes has even more to worry about because Kayce killed his brother Lee's killer on Season 1, so there is going to be fallout from that for sure. Especially because the man was Kayce's brother-in-law. If I were him, I'd be scared to blink in case my wife was looking for revenge.

Grimes is up for the challenge that comes with keeping murder in the family. He told the Salt Lake Tribune, “I knew this was going to be a pretty dramatic and intense job. I’d seen Taylor’s other work, and I was a huge fan." He continued, "There’s a tone. There’s just always pressure and there’s always an energy — a kinetic electricity to it.”

As for the cast's leader, Kevin Costner, he says there is a specific reason his show is so popular. "You hear the heartbeat of a show that is catching the imagination of the people," he said in the same teaser video.

Costner says he wasn't sure about Season 2 at one point, but he and the whole cast are dedicated to making the best show they can. “I thought we were going to do one season, and at some point it was wanting to be a long-form series. I had to make a decision, and I certainly wouldn’t want the show to fall apart by me stepping aside,” Costner said in the Salt Lake Tribune.

I'm so excited that he decided to stay and that the whole cast is so passionate about the Season 2 stories.