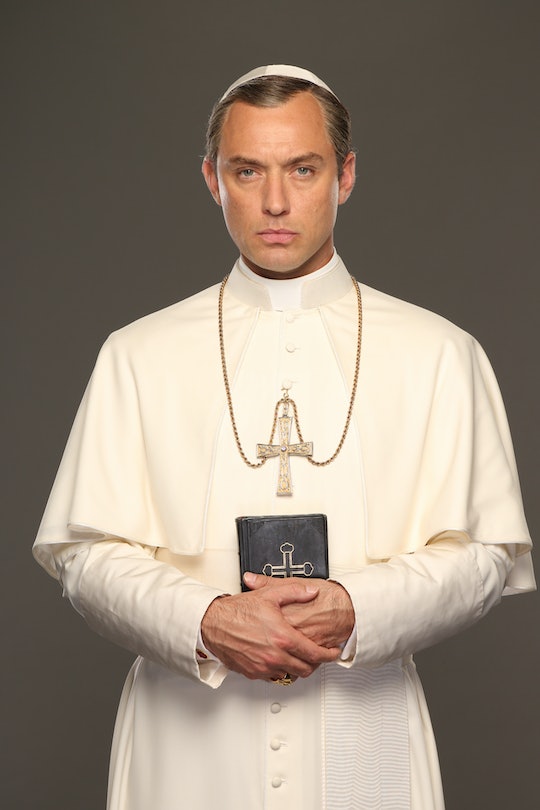 In The Young Pope, the main character's election to his position comes as a surprise, and he ends up being a lot more controversial and conservative than anyone expected. Considering the political climate in the United States at the moment, there's an easy comparison to draw between the fictional Pope Pius XIII and the man about to be elected President of the United States – and it's something Twitter was quick to pick up on. The Young Pope and Donald Trump comparisons on Twitter are eerily accurate.

Though The Young Pope was filmed long before the election (and the first season was released in Europe back in October, too), it's difficult not to see the similarities between the main character and the current President-Elect. Pope Pius XIII, who was born Lenny Belardo in New York, has a flashy personality even as he – unlike Trump – shuns the idea of a major media presence. He doesn't care who he offends, prizing his opinions and his ego above all else. He's petty when it comes to asserting his position of authority over those that try to challenge him. He's also conservative in the extreme, seeking to return to an earlier, even harsher time in the Church's history that would undo any small steps towards modernity that the Church had taken.

With less than a week to go until Trump's inauguration, the timing The Young Pope's premiere is uncannily apt. Every day that passes brings home the reality of the situation, making the idea of the next four years weigh heavily on the minds of many. The future can feel like it's in a very precarious position right now and The Young Pope, with its powerful and obstinate protagonist deeply lacking in compassion, can feel a little too close for comfort at a moment like this.

The similarities between the fictional Pope Pius XIII and Trump were noticed by the show's lead actor as well. While Jude Law initially worried that Pius' rise to power might come off as far-fetched, he quickly realized that it was actually very plausible in this day and age. According to Law, Pius is "unpredictable and unknown in that environment, just as Trump is in the political world. And I think just the impact and the surprise in his election is perhaps relatable."

As the reactions on Twitter prove, it's more than relatable – it's scarily accurate.