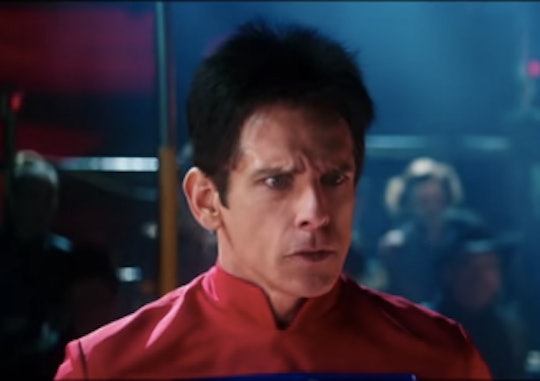 Hold on to your selfie sticks, because the trailer for Zoolander 2 has arrived, and it looks awesome. The first glimpse at the long-awaited follow-up to the 2001 film was released Wednesday, and this time, our favorite really, really, ridiculously good-looking models are back to help Interpol figure out who is behind the assassination of some of the world’s most beautiful people — who all died making the classic Zoolander face, Blue Steel (obvi).

The film, which was written by Ben Stiller, Mr. Jennifer Aniston (aka Justin Theroux), Nick Stoller, and John Hamburg, is an updated take on the old Zoolander-style oblivious humor, except now Derek (Stiller) and Hansel (Owen Wilson) have turned into washed-up male models who are so early 00s. The best part of the movie though looks like it might just be the virtually-endless string of famous faces appearing in the film: Demi Lovato, Usher, Justin Bieber, Lenny Kravitz, and Miley Cyrus make cameos as the too-beautiful-for-life victims; Penelope Cruz stars as a super-hot Interpol agent; Benedict Cumberbatch kills it as an androgynous high fashion top model named “All” (YESSSSS), and Kristen Wiig is almost unrecognizable as some kind of gloriously plump-lipped, European fashion villainess. Christine Taylor, Billy Zane, Cyrus Arnold, Fred Armisen, Olivia Munn, and Kanye West (!) also star.

And since Instagram may as well have been made with Derek Zoolander in mind, it seems only right that Stiller has been posting in character on his account in the lead up to the trailer launch:

Is there anything better than watching Derek Zoolander dance on a loop to Justin Bieber? I don’t think so. Also, you’re welcome.

More Like This
Lyle, Lyle, Crocodile Is Heading To The Big Screen As A Musical Comedy
Prince Charles Got All Mushy When He Met Lilibet For The First Time
Victoria Beckham Reflects On Being Forced To Weigh Herself On TV After Giving Birth
Megan Fox Explains Why She Asked Machine Gun Kelly If He Was Breastfed As A Baby