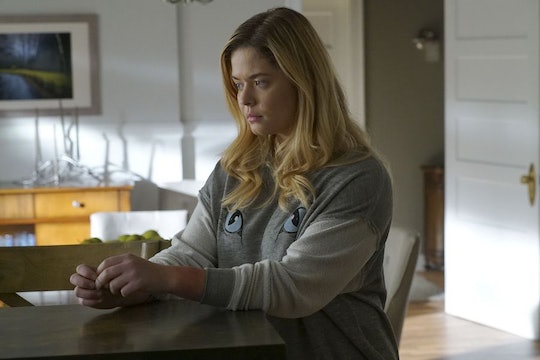 Theories About Alison's 'PLL' Pregnancy To Mull Over

Poor Alison has been through the wringer on Pretty Little Liars. After being fake murdered, going on the run, losing her newfound sister, and getting married to a man who drugged her for revenge (and to get his hands on her fortune), she found out she was pregnant. While the simplest explanation for that was that her imposter husband Elliot Rollins knocked her up during their brief honeymoon phase, some fans aren't so sure. A show like this certainly doesn't go with the simplest explanation most of the time. These theories about Alison's pregnancy on Pretty Little Liars look for alternate possibilities.

Alison's pregnancy was a shock, but the circumstances were also less than ideal. After all the abuse she dealt with at Rollins' hands and the fact that she sort of murdered him, Alison's pregnancy was like the cherry on a sundae nobody ordered. It wasn't the best situation to bring a baby into (during which birthday do you drop the "I killed your dad after he drugged me for weeks" bomb?), so it's understandable that fans would look for a different answer for her unexpected situation. A few of these theories border on magical realism, but considering some of the things that have happened on Pretty Little Liars, they're downright realistic.

There May Be Two Mommies

The biggest and most popular theory about Alison's pregnancy is that she's not actually the unborn child's mother — well, not it's only mother, at least. Back when Emily was donating her eggs for the big payout, said eggs were stolen and never heard from again. What if A.D. took them, fertilized them, and implanted them into Alison? It's got all the absurdity and creepiness of something that would absolutely happen on Pretty Little Liars. Why else would Emily's eggs have even been a plot in the first place?

It's Not Alison's First Child

Remember back when Alison was still missing and it was implied that she might be pregnant? It ended up being a false alarm, but some fans have wondered if perhaps that wasn't the case and Alison did end up having a child. She was away from Rosewood for a long enough period of time. And some have theorized that the child — Alison's first, who would be around seven years old now — grew up to be that mysterious Amish girl Eliza, whose favorite doll was her Alison one. Apparently in the original books the series is based on, Wilden (who would be the kid's father) is Amish, which is a curious detail that could support this theory.

Alison Won't Have The Baby

Reddit user IntrovertedJustin speculated that all the stress might cause Alison to have a miscarriage. As they pointed out, Alison has been imprisoned, drugged, thrown into a mirror, and dealt with her friend being shot as well as the return of her mysterious aunt. Alison has been through a lot and her feelings about the pregnancy are mixed considering the circumstances. Her choosing to have an abortion would make sense, but is unlikely because shows often skirt something that could be perceived as controversial (though that is improving). Soap operas routinely will give characters miscarriages as a way to terminate pregnancies without making an active choice. It's far from ideal, but it is a possibility.

Radley Is Worse Than You Thought

Reddit user Arrco6513 put forth a theory about Radley and all the babies that seem to have been born there. "What if Radley had been using the female patients as surrogates and selling the children?" they wondered. "Ali being wheeled into the light, and her subsequent pregnancy, could be a parallel that Uber A is playing out?" The idea is totally horrifying, but would explain why there seemed to be so many children born to patients at Radley, which is apparently an institution straight out of American Horror Story: Asylum.

Alison's pregnancy is a storyline that's sure to stir up a lot of complicated feelings and difficult situations, but hopefully it resolves in a way that gives her a little bit of peace, at last.