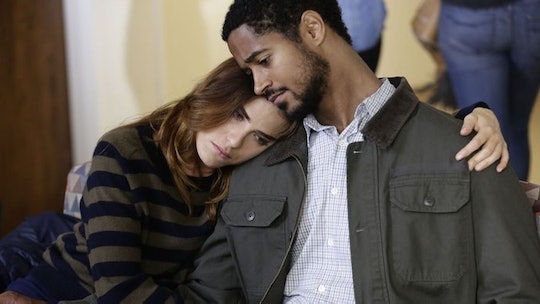 These 'HTGAWM' Theories About Laurel's Mom Prove She's Hiding Something

At the end of last week's episode of How to Get Away with Murder it was revealed that on the day before he died, Wes met up with Laurel's mom. Now fans are trying to understand how in the world Laurel's mom knew Wes and did she play some role in his murder? Below are a number of theories about Laurel's mom on HTGAWM that could lead to some answers.

This season of HTGAWM has delivered bombshell after bombshell. Just when it seemed like Wes' murder was resolved during the Season 3 finale with the reveal that Dominic had killed him, Season 4 has only left fans with more questions. First, it turned out Wes called Dominic on the day he died and he used his real name, Christophe, on the call. Then, after Frank killed Dominic, someone kept calling his phone, but it wasn't Laurel's dad, Jorge, it was actually Laurel's mom.

Now with this new revelation about the connection between Laurel's mom and Wes, it certainly seems like there's more going on here, but what is it exactly? Is Laurel's mom actually in cahoots with Jorge, like the trailer for Thursday's episode seems to hint at? That's definitely a possibility, but here are some other theories that may explain what's going on.

On last week's episode, it was revealed that Laurel's mom and Laurel are both fluent in French. Back in Season 2 it was revealed that Wes and his mom immigrated from Haiti and the language most commonly spoken there is Haitian Creole, which is largely based on the French language. It just seems too much of a coincidence that of all the languages Laurel's mom could be fluent in it's one that's very similar to the one Wes' mom most likely spoke as well. Additionally, Wes used his real name, Christophe, when he called Dominic, so it doesn't seem like that big of a jump that Laurel's mom knew him by that time too, which would mean she knew him as a child.

The theory that Wes has a twin is a popular one that's been going around since Wes died, but more and more it's beginning to seem like the theory has merit. Reddit user GravityFallaGuy suggests that Christophe is actually Wes' twin, hence why he used the name when he called Dominc. So perhaps Christophe was the one who really met with Laurel's mom and together they came up with a plan to kill Wes. But if that's true, one has to wonder why they killed him and where is Christophe now?

Sometimes the easiest answer is the right one. In last week's episode, Jorge claimed to Laurel that he didn't actually kill Wes. Although it's a little hard to believe, let's look at the facts. Dominic was the one who actually killed Wes. Most of us, including Laurel, assumed it was at Jorge's command, but it was Laurel's mom who was obsessively calling him. Perhaps Dominic was working for both of Laurel's parents but it was her mom who had him kill Wes. Still, one has to wonder why?

Laurel's Parents Were Working Together

HTGAWM has definitely thrown fans a number of red herrings in these trailers before, but perhaps this time it's at least hinting at the truth. Ashley on Twitter suggests that Laurel's parents were working together at some point to get Wes out of the picture so Laurel could be with Dominic. But perhaps Laurel's mom had a change of heart, and with Dominic's help, they faked Wes' death so her dad couldn't kill him.

Laurel's Parents Were Actually Working Together To Save Laurel

Alternatively, Twitter user Lisa Limon suggests everything we've learned this season has really proven that there's been a larger plan at work to protect Laurel and the rest of the Keating Five. What if Laurel's parents faked Wes' death so that he could take the fall for all the murders that have occurred over the past seasons? Then no one would go to jail and Wes may be in hiding somewhere.

You can learn more about whatever's going on with Laurel's mom on Thursday's episode of How to Get Away with Murder, which airs at 10 p.m. ET on ABC.