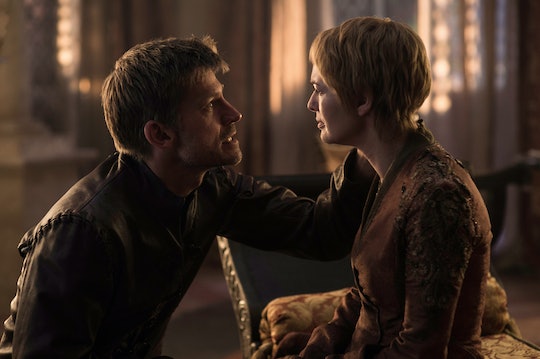 Cersei's power currently seems assured on Game of Thrones, or at least the war appears to be turning in her favor. She has destroyed Daenerys' fleet and gained one of her own thanks to Euron. She's taken out more than a few of the major houses, and even managed to win the people over (for now). However, there is a dark prophecy hanging over her that foresaw her death at the hands of "the valonqar," which means "little brother" in High Valyrian. This has led many to believe that the slightly-younger Jaime will cause her demise. These theories Jaime will kill Cersei on Game of Thrones prove that it's a possibility.

But first let's take a closer look at that prophecy. When Cersei was a child, she visited a witch called Maggy the Frog to seek answers about her future. Specifically, Cersei wanted to know if she was going to marry then-prince Rhaegar Targaryen, to whom she was promised. Maggy revealed that Cersei would marry the king (Robert), who would have 20 children while Cersei would only have three. Those three children would be crowned in gold and then shrouded in gold after their deaths. Game of Thrones showed a portion of the meeting between Maggy and Cersei, but left out the key line about her death: "And when your tears have drowned you, the valonqar shall wrap his hands about your pale white throat and choke the life from you." Cersei interpreted that to mean her younger brother Tyrion, but there is another possibility and these theories make that all the more evident.

The Kingslayer Who Was Promised

There have been many theories about who might be the second coming of Azor Ahai, a legendary warrior also called The Prince That Was Promised. Some have wondered if Jaime could be Azor Ahai for a reason that ties into the word "valonqar." Reddit user byrd82 pointed out the following: "Valyrian words for gold and hand are aeksion and ondos. Valyrian words for lord and light are aeksio and onos. Could a translation error have led to the erroneous creation of a religion? Will the true savior be the 'Gold Hand?'" With his golden hand, Jaime could end up being the answer to two prophecies.

Perhaps Jaime's potential murder of Cersei will mirror his murder of Aerys, the Mad King. If Cersei did something dangerous enough, would Jaime step in to take her out so that he could neutralize the threat? Jaime has struggled with doing the right thing before, and he may be conflicted about putting the good of the city above Cersei's safety. She already burned down half of King's Landing (the very thing Aerys was threatening to do when Jaime killed him) and Jaime's still there, so it's hard to tell where the line is for him. However, it's always possible that he could make the same choice he made all those years ago to save the realm.

One theory isn't about the act so much as the aftermath. While many think Jaime might die shortly after Cersei or even take his own life in response, Reddit user Debaser97 came up with something different. They speculated that after killing Cersei the Mad Queen to save the city, Jaime is sentenced to death by Daenerys. However, Tyrion is able to convince her to send Jaime to the Wall instead (if the Wall is still standing at the end of all this), where he joins the Night's Watch and perhaps eventually becomes the new Lord Commander. It could end up providing Jaime with some redemption, too.

Though Jaime's devotion outlasted the destruction of the Sept of Baelor, the show has indicated that his disillusionment with Cersei may continue to grow. Reddit user Dean_Craig_Pelton wondered if the recent knowledge that Olenna killed Joffrey could make things worse for Jaime and Cersei: now he knows she nearly had Tyrion killed for nothing, which led to Tyrion killing their father as well as the death of Oberyn Martell, which in turn caused Ellaria to kill Myrcella. So much death resulted from Cersei's vendetta against Tyrion and knowing that could make Jaime finally see the truth about Cersei. After their relationship falls apart, he may be less conflicted about taking her life.

Tyrion could be the one to put a wedge between them, too. Since Cersei's actions so far haven't been enough to put Jaime off, Reddit user Morbanth theorized that Cersei could take things a step too far by finally murdering Tyrion as she wanted to for years. Jaime loves his brother, so that could be the last straw that causes him to take revenge on Cersei.

It Was A Mercy Killing

Reddit user narcissablack03 saw things a different way. Instead of falling out of love with Cersei or getting fed up with her antics, Jaime could kill Cersei on her request. They wrote, "What if King's Landing is burning down, Cersei knows she's lost the war and asks Jaime to kill her? So it still does make him Queenslayer, Valonquor and in love with her till the very end."

It could make sense, and fulfill the valonqar prophecy in the process. During the Battle of Blackwater, Cersei made it clear that she'd rather die than be captured. And Jaime's dedication to her makes it difficult to imagine a scenario in which he would kill her. This theory could be the answer.

Several Redditors have speculated about the possibility that the prophecy could be answered with an unforeseen loophole. Though Arya is on her way home now, her vendetta against Cersei won't be forgotten. She may use the same tricks she used to infiltrate the Freys to take Cersei out: she could wear the face of the person Cersei trusts the most. After killing Jaime, Arya could take on his appearance to murder Cersei. That stays true to the prophecy while being an unexpected twist at the same time.

Despite everything Cersei has done, Jaime has remained loyal to her. It will take a lot to push him over the edge. But no matter what happens, Jaime and Cersei's story is intertwined. When the end comes, there's a good chance they'll be together for it.