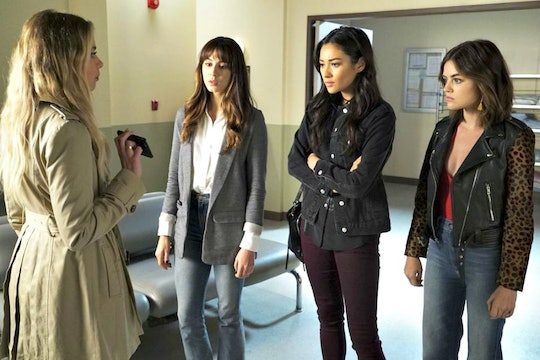 Theories That Prove Lucas Is A.D. On 'PLL'

Every week, fans get closer and closer to finding out who A.D. is on Pretty Little Liars and according to the cast, everyone is going to be totally shocked and sort of happy to find out who it is. It could be any number of people in Rosewood, but there are a few running theories that prove Lucas is A.D. on Pretty Little Liars. And they're just good enough to consider. According to I. Marlene King, the showrunner of PLL, she's known who A.D. is this entire time, from the very beginning. Which means that it's probably not any of these newer characters that have showed up in later seasons.

There is one very good reason why A.D. can't be Lucas — his friendship with Hanna. Hanna and Lucas have been close since the first season, when all of this first started, and she's also the one that seems to get tortured the most. She's been run over with cars and burned with a cattle prod. That is not the work of a close friend.

But maybe Lucas is just evil enough to think that beating up on Hanna is the easiest way to distract their attention from him, or he's so out of his mind that he gets offended by Hanna and then wants to hurt her.

Think about it. Here are some good theories that prove Lucas is A.D.

He Shows Up Just In Time

In Season 6, Episode 19, "Did You Miss Me?" Lucas shows back up in Rosewood after the five-year jump just when things start to heat up. He's supposed to be "traveling for work" but seriously: what kind of work requires him to be in Rosewood. This is also the episode where Hanna becomes the "cheese" in the rat trap and claims to have killed Charlotte. If you remember, the "return of Uber A" in Season 3 is also when Lucas shows back up, too. Whenever Lucas is around, things get pretty ugly.

Given that A.D. has some very, very good wax mask skills, it's possible that when Lucas is "traveling," he's actually just hiding in plain sight around town, blending in. Like being an old man at the Radley.

He Hates Ali, But Loves Hanna

Lucas hates Ali, which is how this whole thing started to begin with, sort of. He's also basically in love with Hanna and in the early days, Ali was SUPER mean to Hanna (she was mean to everyone, but it was nasty with Hanna) so Lucas might have thought he was doing a good thing by hurting the "mean girl."

But as the show progressed, Hanna grew farther and farther away from him — first with Caleb and then with Jordan. When Lucas returned after the five-year flash forward, he was a little catty about Jordan He also offered Hanna money and help for the first time and she rejected him. Shortly after, she was tortured. Maybe Lucas snapped based on Hanna's actions and then took it out on her.

He Could Definitely Build "The Game"

Not only is Lucas wealthy (and so has money to support himself while being A.D.), but he's also extremely tech savvy. So he could have been bugging their phones, tracking their location, building this crazy intense game — all of it. Although Aria made hacking into Sidney's phone look super easy after just a quick lessons from Caleb in "Hold Your Piece," only someone with Lucas' tech skills could pull off stalking the Liars all this time.

He Loaned Hanna His Loft

Being so tech savvy, it's entirely possible that Lucas has his loft bugged. He's letting Hanna and Emily stay there, but maybe it's not because he's a nice guy. A lot of times A.D. would have to know the exact plans the Liars make — and they make a lot of them in the loft. His smart loft is also where Aria almost got blown up. He totally could have hacked that.

He Went To Hong Kong

Mary Drake is up to no good, everyone knows that. But one very vigilant PLL fan that uses the handle PLLSparia pointed out on a fan thread that both Lucas and Mary Drake have Hong Kong stamps on their passports. It could be a red herring, but it could also be a clue. If they've been traveling together and plotting all this time, that would explain a lot.

He Has A Lot Of Money

Lucas has a ton of money these days. And A.D.'s favorite mode of transportation is a limo (remember Charlotte's funeral). Who else in Rosewood would be able to afford a limo all the time? It also sort of fits with Lucas' sometimes petulant behavior, like A.D. needs a fancy car to overcompensate for being sort of an outcast. He also just bought a factory outside of Rosewood, which is a great location for a new lair. Who buys factories and mills?

So Why Help Hanna So Much? He's Jealous

A.D. is extreme. And all the "help" that Lucas gives Hanna could be a way for him to make up for all of the awful things he does to the girls. A lot of times the really bad things happen when Hanna is actually the happiest, which could throw Lucas (or A.D.) off his game. Jealousy and rejection can make someone do some pretty out there things. Also — did you see Lucas' face when Hanna had to ditch the meeting with the investors last week? He was happy to help, but sort of let down that she wouldn't be at the meeting and also kind of relieved that she wouldn't have to ruin her career.

There are lots of other tiny things that indicate A.D. is Lucas. Like the fact that "Uber" is a German word and he's the only one with a German last name. Right? Weird. Alas, everyone will just have to wait a few more episodes to find out.