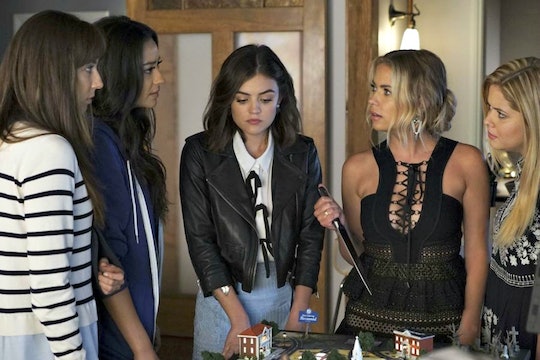 This 'PLL' Character Could Totally Be A.D.

Trying to figure out who A.D. could be on Pretty Little Liars can become a full-time job. It doesn't help that the cast has been promising that fans will love, love, love the ending. Which means that some of the theories about A.D., like it's one of the Liars themselves, just don't add up. Because that wouldn't make anyone happy. However, they've also said A.D.'s identity was known to the writers way back when they began the series, so the villain is someone fans have known for a while. There are lots of theories that prove Wren is A.D. on Pretty Little Liars and if you think about it — it totally makes sense.

He's been around from the start of the series, popping up as Melissa's fiancé just after Ali's "death." Maybe that's why Melissa and Wren really split — Melissa knew he was a creep. But that's all speculation. What we do know is that he's expected to return later this season, just around the time viewers should be finding out who A.D. really is. Why bring Wren back after all this time? Sure, saying "goodbye" to all the original characters is a nice way to end the series, but it's more likely that the plot has something to do with it.

Here are some other reasons why Wren could be A.D. on Pretty Little Liars...

Wren is a doctor who worked at Radley and we all know that whoever A.D. is has something to do with Radley. (Unless it doesn't, in which case we've been had.) When Mona was in Radley, he was randomly there. He also worked there when Charlotte was a patient. And as if that weren't enough — who else could have snagged the letter from Mary Drake to Spencer that she wrote while in Radley? Coincidence? Probably not.

This scene is just too weird. At Radley, Wren is seen drawing this picture. With the black hair, that could be Mary Drake. But the red coat is a little ominous since it's the one garment that keeps following the Liars around. Why make a red coat? It just doesn't make sense.

Whoever A.D. is knows his science and Wren's medical degree means he would know how to torture the girls just enough to not kill them. Also, how many times have prescriptions and drugs come into play? How else would A.D. get those if they didn't have a prescription pad? Also, that poison steam in the game that took Caleb out last week? Only someone who knew the medical science behind that would be able to really pull it off.

Sorry, but Wren has always been as creepy as he is sexy. Seriously, who puts the moves on his fiancé's younger sister? And then also gets romantically connected to her friend? Someone who's trying to ingratiate himself with the Liars, that's who.

Throughout all the seasons, Wren's name is mentioned in passing. Which is a great plot device to make sure no one forgets who he is so they're not confused by the ending. Also, in the flash forward, the girls say that he has a place in Philadelphia, which is right outside of Rosewood — so he could go back and forth pretty easily, even hiding in plain sight with a creepy mask. It's also where a lot of A.D.'s purchases and weird "gifts" are made.

He Has A Medical History, Too

In the show, he tells Spencer that he has obsessive compulsive disorder and that his dad was schizophrenic. That could help explain A.D.'s behavior toward the Liars. Also, whoever A.D. is is pretty organized.

There are a lot of tiny things that might point to Wren being A.D. But when it comes to Pretty Little Liars, anything is possible.