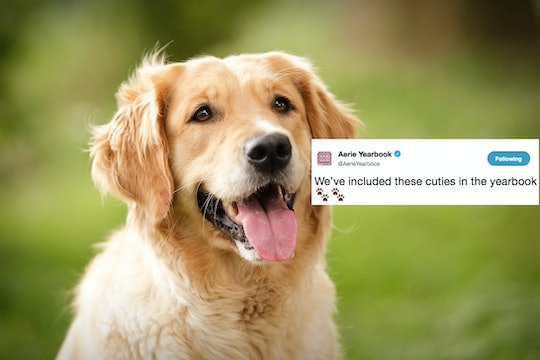 Therapy dogs play an important role after any tragedy. They help victims keep spirits high during their recovery and help survivors as they grapple with their sadness and guilt in the wake of something horrible and unimaginable. Following the Feb. 14, 2018 shooting at Marjory Stoneman Douglas High School, emotional support animals were brought in to assist students as they returned to classes following the horrific killing of 17 classmates and staffers. They were so key in the recovery of the students, in fact, that the therapy dogs who helped the Parkland survivors got their own page in the high school's yearbook, according to local news outlet WSVN. And, truly, it's the most heartwarming thing you'll see today.

The yearbook company, Aerie Yearbook, tweeted out a photo of one of the dogs — a very good boy named Chief — looking over the page of all 14 dogs that appeared in two rows at the end of the students' photo section. Chief appears to be looking proudly over the photos, which Aerie Yearbook gleefully tweeted about. "We love that Chief loves his yearbook! Make sure to find him to sign it," the photo is captioned on Twitter.

As if the story could be even sweeter, the dogs got all dressed up for the occasion, sporting bowties and other accessories for their yearbook photos, according to WSVN. According to Metro, the dogs featured in the yearbook include:

Twitter users were understandably obsessed with the idea of including the therapy dogs in the yearbook, as they have surely become an important part of the school. Indeed, Aerie Yearbook's Twitter mentions were flooded with sweet reactions from fans who praised it as "awesome!" and "beautiful."

"Can someone get an ink pad for his paw so he can sign yearbooks as well?" one person tweeted.

"This is so awesome! The ultimate honor for any therapy dog is knowing he/she made a positive difference in another’s life. So happy to see these wonderful," another said. "#TherapyDogs being honored this way!! #PawFive."

Therapy dogs were first brought to Majory Stoneman Douglas in March 2018, as the surviving students and faculty prepared to return to the Florida high school after the shooting, according to Mashable. And it was Principal Ty Thompson's idea to bring in the sweet pups, according to CBS Miami.

Thompson had been active on social media after the shooting, posting photos of students and teachers with the dogs on their respective first days back on campus, as Mashable reported. In one tweet with photos with the dogs, he wrote, "Thank you to the therapy dogs; that really helped a lot of us."

Nine of the therapy dogs came from Lutheran Church Charities in Illinois, according to 10 Daily. And the pups were such a hit that Principal Thompson invited them back and increased the number of therapy dogs to allow more students to reap the benefits, as Mashable reported.

Therapy dogs play no small role in the healing process, and it's a beautiful thing to see their work in real time. The kids at Marjory Stoneman Douglas will likely never forget the horror they lived through, but they'll also have lasting memories of comfort and joy brought to them by those sweet, and adorable, therapy dogs.